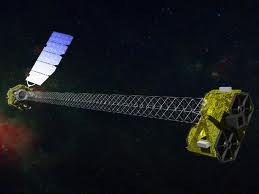 There’s a new way to get a spacecraft into orbit, and it’s a lot cheaper than the old. You just attach it to the bottom of an airplane, fly up to 39,000 feet, drop it, turn on its rocket engine, and it’s off!

That’s exactly what NASA did on June 13. when an orbiting X-ray observatory named NuSTAR was boosted into orbit from the skies above Kwajalein Atoll in the central Pacific Ocean, launched from a rocket carried by an Orbital Science Corporation L-1011 “Stargazer” plane.

When the L-1011 released its payload—a Pegasus XL rocket, also from Orbital Science—it was allowed to free-fall for about 5 seconds, then ignited, and propelled NuSTAR into space. A video showing a previous Pegasus launch is online at: http://www.nasa.gov/multimedia/videogallery/index.html?collection_id=80521

About 13 minutes after the initial release from the Stargazer, NuSTAR separated from the Pegasus rocket’s third stage. At this point, NuSTAR was in its final orbit—a low-Earth equatorial orbit at an altitude of approximately 340 miles and an inclination of six degrees. When NuSTAR separated from the Pegasus, the satellite’s system that controls its orientation in space, or “attitude,” began to stabilize it, and the spacecraft solar arrays were deployed.

Roughly one week after launch, engineers will command NuSTAR to deploy its lengthy 33-foot (10-meter) boom, allowing the telescope to focus X-ray light into crisp images. Unlike visible-light telescopes, X-ray telescopes require a long distance between the mirrors and detectors to focus the light. Science operations are expected to begin about 30 days after launch.

Why launch from the air? Airplane-assisted launches are significantly less expensive than those that take place from the ground. Less fuel is needed to boost cargo away from the pull of Earth’s gravity. NuSTAR is part of NASA’s Small Explorer program, which builds focused science missions at relatively low costs.