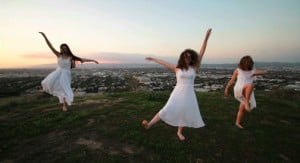 Inspired things can happen in a collaboration that might not otherwise have happened. In fall 2011, the AVPA Film, Dance, and Art Departments participated in a collaborative project entitled Chimera.After submitting a grant proposal for an intradepartmental endeavor, film teacher Alexis Butler was awarded a grant from ING Foundation. The grant made it possible for art students, dance students, and film students to create short films which will be submitted to Dance Camera West’s 11th Annual Festival focusing on Dance Media. This is an international dance media festival and conference. Dance Camera West has put out a call for new dance media, which includes student submissions. The festival will take place June 2012.

The students met initially to view examples of dance films, old and new, and to discuss issues related to filming dance and choreographing for the camera specifically. The students were placed in crews and met twice to make choices about location, props, costumes, blocking, lighting, and sound design. Early in the process, the film and art students had the opportunity to watch the dancers in class combining movements into choreographed sequences. The art students were inspired by the dancers’ innovative choreography to plan novel production and costume designs. The film students were challenged to capture all this creativity with cameras and editing.

The eight groups met to view first cuts of the resulting films, which were critiqued by all, and then the various film directors reedited their films based on peer critique to create second cuts, which were again shown to the entire group for a second evaluation. By the end of the venture, these three branches of the Academy of Visual and Performing Arts program had a deeper understanding and respect for each other. The dance, art, and film students each provided valuable talent and input, and the final eight films are an accomplishment that all participants can be proud of. The satisfaction that comes from creating works of art that can be seen and appreciated by a wider audience is quite rewarding for all the artists involved. The Chimera Project films will be shown locally in the coming months and hopefully at the Dance Camera West Festival in June 2012.