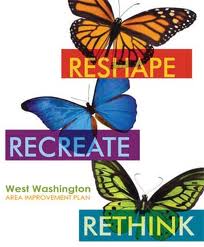 “I have to say that when I saw the first twinkling lights of that first pumpkin patch,” City Councilmember Scott Malsin offered, ” I thought it was a great improvement to the property.” At the City Council meeting on June 27, the proposal to develop the property at the intersection of Washington and Centinela drew a number of neighbors who wanted to make their thoughts on the matter known. The idea that they had seen enough pumpkin patches and Christmas tree sales was mentioned by more than one resident, but the lack of enthusiasm over the current plans was also a common theme.

While not quite as historically contentious as Parcel B, the property in question has been open since 2007, when the historically unattractive U.S. Liquor Store was bulldozed out of existence. The seasonally recurring uses of the site such as a pumpkin patch and Christmas tree lot were noted as being very unsatisfying. The proposed “market hall” being put into RFQ (Request for Quotes) by the Redevelopment Agency, along with the a three level parking structure, had the neighbors concerned. The negative energy of the liquor store has been gone long enough that the empty space, surrounded by chain link fencing, has taken on a negativity of it’s own. But the proposal for a “market hall” on the spot sounded unsatisfying to most.

Bob Pine, a resident on Colonial Avenue, spoke first reminding the council of the previous meetings in regard to the property, saying that “I’ve been going down memory lane here, and we’ve been talking about this since 2001. There were many meetings of stakeholders, and opinions were voiced. The proposal here in front of us is not exciting, and in fact, it appears to be the opposite of what we had previously agreed on.”

Pine detailed the language of the previous agreement, noting a “beautiful friendly pedestrian gateway to Culver City.” The addition of 245 parking spaces “indicates a magnet, and traffic in this area is already overburdened.”

Another resident of the neighborhood, Jean Ballentine, lamented several incidents of gang activity she had witnessed in the area and feared that a parking garage would attract more unwanted elements than additional traffic. “We have a pleasant, quiet street and we want it to stay quiet.”

Sol Blumenfeld, the Community Development Director, explained the city’s side of cleaning up the space and selling it. While agreeing that a market hall and a parking garage would bring more traffic to the area, he offered, “the intent here to serve the local area and also attract people.”

“In order to leverage the market hall,” Blumenfeld explained,  “we need to provide the proper incentive to get them [small boutique eateries and artisan food retailers ] in place, frankly the thing to do is to provide the parking.”

The other residents who spoke noted the parking structure as the biggest worry to the immediate neighborhood.

With a promise from Blumenfeld that there could be a meeting in regard to the development for the neighbors within the next two weeks, the RFQ was passed by the council.

When Mayor Chris Armenta stated “We are ready to take action on closing the structural deficit,” he was at the end of a half an hour of remarks from the other council members, following a …[READ MORE]

It’s an important moment when someone decides that the parking ticket is worth it. The city council meeting that convened on Monday May 3 was interesting for many reasons, but one of them stood out …[READ MORE]

We Have a Winner! John Nachbar Named City Manager

The City Council of the City of Culver City has announced the appointment of John Nachbar as its City Manager. Mr. Nachbar will assume the City Manager position in late August or early September. Mr. …[READ MORE]