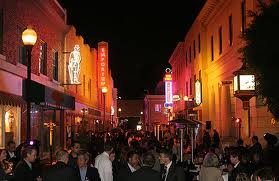 The glowing neon on Sony’s Main Street colored the evening air on Friday May 6 with a soft light. The spring chill was offset by the warm smiles of the people who came to celebrate. The Culver City Education Foundation’s annual “Tribute to the Stars” hosted a delightful evening, honoring the teachers, staff and volunteers who work so hard to make our schools the best.

The evening began with a wine and cheese reception on Main St. There were tables lined with silent auction offerings, and the street filled up with friends discussing schools, budget cuts, classroom assignments, and awards.

The crowd was invited into the sold-out Cary Grant Theater for the awards ceremony, and the a live auction MC’d by Mr. Culver City, the charming Mike Cohen.

The incomparable Janice Pober of Sony Pictures Entertainment clutched the podium as if to shake it, and exclaimed “I am so glad you are all here !” Her tireless efforts to keep Culver City schools in the top categories of creativity and excellence have made her an inspiration for many of the district’s supporters.

The Teacher of the Year Award, sponsored by Sony, went to Karen Burkenheim. In her thank you address, she was effusive in her enthusiasm for her school and her students. This love affair was obviously mutual, and the applause from the audience was loud.

Lupe Aguila, the winner of the Rotary Club Classified Employee of the Year, told a story of how she became a mother, realized she needed to know more, and went back to school to get her childhood development degree. The cheers from the crowd reflected her introduction by district administrator Leslie Lockhart, who noted “Anyone who works with preschoolers all day long should be dipped in gold and rolled in platinum.”

The CCUSD Superintendent’s Award went to Symantec, for all of their generous contributions to the district. Wally Marks won the CCEF Shining Star Award, sponsored by Antioch University, and gave an acceptance speech that offered his family’s motto “Give while your hands are warm.” Noted restaurateur and school garden donor Alan Schulman of Akasha won the CCEF Presidetn’s Award, sponsored by Playa Vista.

The school volunteers who won the day were Anne Burke, from the office of child development, Amanda Chapman from Lin Howe Jan Salvaterra from El Marino, Bonie Seeberger from CCMS, Chris Noda from El Rincon, David Hauptman from CCHS, Dina Wahlert from Farragut, Marsha Litter from Culver Park, Heather Moses from La Ballona and Doris Childs from the Adult School. While every school in the district has different needs, they each have outstanding volunteers. The Volunteers of the Year were sponsored by See’s Candies, who also gifted each of the guests in the crowd with a chocolate truffle.

Leslie Adler and all the CCEF volunteers should be pleased and proud with their success. The recognition of the people who make our schools and our students first rate was a great reason to spend an evening on Main St. If you are not yet a member of the CCEF, just go to www.ccef90230.org/ and you can be at the first planning meeting for next year’s “Tribute to the Stars.”

CCEF Reaches for the Stars with “Tribute” Take

There are fundraisers and then, there are major fundraisers, but the Culver City Eduction Foundation launched itself into a whole new category bringing in $80,000 from the “Tribute to the Stars.” Using a new format …[READ MORE]