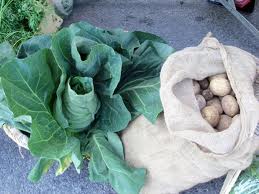 St. Patrick’s Day is just around the corner. True, you might have to look elsewhere if you’re craving green beer to go with your corned beef and cabbage, but the freshly picked organic cabbage available at several Tuesday afternoon Culver City Farmers Market is the perfect sweet companion to the hearty, salty meat in this traditional St. Patrick’s Day meal.

Believe it or not, neither corned beef nor potatoes are indigenous to Ireland. The culinary history of Ireland over the last 1000 years has been interwoven with its political and cultural history. Anglo-Norman invaders first came to power in Ireland in the 11th century. All of Ireland remained under British control until the early 1900’s. While the Irish raised cattle, they sold the beef to the more affluent English and subsisted on dairy, grains such as barley and oats, pork, and beef offal (variety cut), with the occasional beef or lamb stew, along with home grown vegetables.

With the development of commercial tin and canning operations in the mid 1700’s, Irish beef was corned (preserved with salt) and tinned for consumption in England and for the Atlantic trade. But for at least 80% of the Irish population, corned beef was an expensive delicacy far beyond their limited means.

Potatoes were introduced to the Emerald Isle from South America in the 1600’s as a garden plant. The compact plant and its nutritious, long-keeping tubers quickly became the most prominent food source for the poor Catholic majority as its productivity provided the most “bang for the buck” on their small home farms. When blight struck the Irish potato stock in 1848, millions died. Over a million Irish migrated to the United States. Corned beef, which had been the out of the economic reach for most Irish in the home country, was now affordable for many Catholic immigrants in America. The Irish-Americans quickly embraced corned beef. It has become a prominent feature on St. Patrick’s Day menus in North America, but would be viewed as an anomaly back in the home country.

Shepherds Pie, on the other hand, is an authentically Irish dish. The traditional Irish shepherds pie uses ground lamb. I was first introduced to shepherds pie by my older cousin, Debbie Phillips, who used easier to find and more economical ground beef. Why not? After all, the shepherds pie’s popularity is due in large part to its convenience and economy. Some traditionalists would call her version “cottage pie” instead of “shepherds pie,” but its all easy and delicious just the same.

Earlier this month, residents of The Meadows in Fox Hills were treated to an Irish cooking demonstration by Chef Brian of Big City Chefs. His shepherds pie with creamy potatoes and Irish gravy calls for ground chicken. Again, why not? I’ve adopted his recipe to take advantage of the fresh green peas and artisenal  goat cheese available the Tuesday downtown Culver City Farmers Market.

Preheat oven to 375 degrees. Boil the peeled potatoes with the garlic and salt and pepper to taste. When they are cooked (about 20 minutes) drain and mix in sour cream and goat cheese. Add  chicken stock. Whip in blender or food processor. Set aside. Put 1-2 T. unsalted butter in a large skillet and add diced onion and carrots. Cook over medium heat until onions are translucent, around 7-10 minutes. Add the ground chicken and cumin. Season to taste. Cook over moderate heat, stirring every so often, until chicken is thoroughly cooked. Add the peas and cook for a minute or two longer, then remove from heat. Meanwhile, heat the butter over low heat in a small skillet. Add in the flour, a bit at a time, stirring all the while. When flour and butter mixture is smooth, add in 1 c. chicken stock and worchestershire sauce. Cook until thick and gravy-like. Combine the chicken and gravy. Place the chicken mixture in the bottom of oven-proof casserole dish. Top with whipped potatoes and sprinkle the remaining goat cheese and a pinch of paprika over the top. You can use a fork to make peaks in the whipped potatoes if you wish. Bake in 375 degree oven for 20 minutes. If the top is not sufficiently browned enough for you, place the casserole under the broiler for several minutes. Garnish with parsley and serve.

Katie Malich has studied up on some Irish jokes in honor of St. Patrick’s Day. It turns out that there is a culinary reason why the snakes left Ireland after St. Patrick came to teach Christianity. One day, St. Patrick was running late for an early afternoon meeting. He emerged from the rectory eating a sandwhich. “Enjoying your chicken sandwich, Father?” asked one parishioner. “It’s a fine sandwich indeed,” St. Patrick replied. “But it’s not chicken. It’s the ‘other white meat’: snake.” A nearby snake overheard this conversation. By nightfall, all the snakes in Ireland had made their way to the shore fleeing for their lives. (Thank, or blame, MudcatCafe.com, for sharing the true story of how St. Patrick drove the snakes out of Ireland.)

Some holiday traditions are fixed in stone. At my college friend’s holiday table I will always find Grandma Eddie’s German-inspired green beans, simmered with bits of bacon and onions. Another friend’s Central American heritage is …[READ MORE]