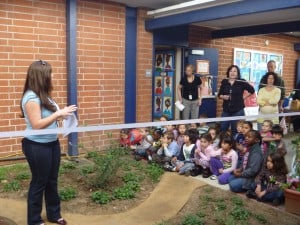 Bubbles floated through the air Friday morning, March 11 as parents and Kindergarteners celebrated a new garden in the Linwood Howe Kindergarten Courtyard. Parent volunteers spent the last year designing and installing the garden. The area has been bare since a large tree was removed several years ago. Now, in it’s place, winds a meandering path among native plants, bushes and a tree-stump sitting area for families to enjoy. “It was great to see the area transformed” reflects Leah Nico, parent coordinator of the project. “Last year when my daughter was in Kindergarten, this area went unnoticed by the kids. Now, it’s crowded with kids playing before school starts.”

Friday’s Ribbon Cutting Ceremony drew a crowd. The Kindergarteners came out to watch the ceremony and parents lined the outdoor corridors. Nameless until last week, the newly finished garden has been named The Volunteer Garden to celebrate the strong volunteer base at Linwood Howe. Principal Ms. Amy Anderson comments “the volunteer Garden is an excellent example of how Lin Howe families see a need and step up to support us.”

The creation of the Volunteer Garden was made possible by a partnership between Linwood Howe, Linwood Howe Boosters, Culver City Parks and Service Foundation, and City of Culver City, Department of Parks and Recreation.

Sip For Our Schools- CCEF Wine Tasting Coming Up