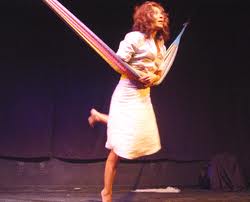 For one very special night, the Los Angeles Women’s Theatre Festival, now in its eighteenth year, comes to Culver City for the first time for a special performance on Wednesday, March 30 at 8 p.m. at The Actors’ Gang Theatre at Ivy Substation, 9070 Venice Blvd.

The evening will be hosted by actor Akuyoe Graham (“Spring Awakening”) and actor-producer-director Fay Hauser-Price, who will present a program of outstanding female solo performers. The evening includes:

Stacie Chaiken in “The Dig: Death, Genesis & the Double Helix” (Theatre): In this excerpted piece, an American genetic archeologist, in the wake of her own mother’s death, is summoned to the ancient Arab-Hebrew town of Jaffa, where something is found that could change what we know and believe about our DNA.

Barbara Cole in “Surviving Chrysalis” (Storyteling): One woman reconciles motherhood and career with her journey toward self-actualization.

Ingrid Graham in “Artemis” (Dance): Named after the Greek goddess of wilderness, this is a tribute to the goddess of nature that exists within us all.

Lydia Nicole in “Calling Up Papi.” (Theatre): A sober look at a young woman’s life, growing up in Spanish Harlem as the daughter of a prostitute and a pimp.

The Los Angeles Women’s Theatre Festival was founded by Executive Producer Adilah Barnes and Miriam Reed. This year’s Managing Producer is Shyla La’Sha. Longtime Honorary Chairpersons are Danny Glover and Hattie Winston. The Festival is an annual event unique among American cultural institutions and should not be missed.

Tickets for the performance are $20 in advance, or for two tickets or more each at the door, or $25 at the door for single tickets. Additional discounts are available upon request for students, seniors, and groups of ten or more.