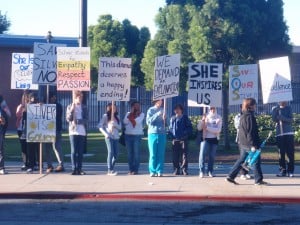 It was standing room only in Culver City High School Principal Pam Magee’s office, and the 25 parents of AVPA students who had come to discuss Sheila Silver’s dismissal were almost literally shoulder-to-shoulder in their protest. Magee, along with Leslie Lockhart, the district’s assistant director of human resources, listened to tremendous praise for Silver, and equally tremendous puzzlement over her dismissal.

While Marni Parsons moderated the conversation, she switched “hats” from being the vice president of the AVPA Foundation to being a concerned parent. There were a few tears, but no shouting, and almost everyone in the room spoke to their concerns, and their childrens devastation about Silver’s dismissal from her position.

The legal aspect of the dismissal tied Magee’s tongue almost completely, but she was clearly listening to the concerns of the parents, and her face showed both consideration and stoic calm. The question that everyone wanted answered – Why ?- could not even be addressed.

Liz Kinnon noted that the students had gotten such great training in organization and scene building that they pulled together the morning’s protest without any help from parents. “I was told to stay out of it.”

Led by Kevin Mitchell, (Kinnon’s son, and multiple award-winner for AVPA/Blurred Vision Theater) the students held a rally that attracted the attention of KABC-TV news, and reporters from many websites and publications. While the kids created the scene, the parents talked box office.

The many donations raised by the parents in the room were offered in specific dollar amounts, and the  refrain- If Sheila goes, all this goes too- was clearly understood. One parent even offered a check to start the legal fund to defend Silver from the dismissal.

It was one of the opening scenes in a drama that will be grabbing headlines and causing a lot of conversation in Culver City.

The next school board meeting will be on Feb. 22 at 7 p.m. For those waiting in the green room, your call is ten days.

When CCHS Senior Nathan Palman decided to audition for “The Laramie Project” last September, he never dreamed that his first foray into theater would result in such a rewarding experience. “Acting in ‘The Laramie Project’ …[READ MORE]

The Academy of Visual and Performing Arts (AVPA) is proud to welcome young filmmakers from around Los Angeles County to participate in the 12th Annual Frost Film Festival. The festival runs Friday and Saturday, January …[READ MORE]