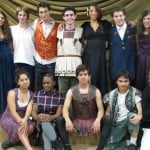 Culver City High School Academy of Visual and Performing Arts (AVPA) presents Pippin, A Musical Comedy at the Sony Pictures Theatre in the Robert Frost Auditorium, 4401 Elenda Street in Culver City. The show runs from April 22 through May 2 with 7 p.m. performances Thursday, Friday, Saturday and 1 p.m. matinees on Saturday and Sunday. Tickets are $15 for general admission; $10 for ASB, children, faculty and seniors. Premium reserved seats are $25, or $10 with a Season Pass.

With music and lyrics by Stephen Schwartz (who also composed the recent Broadway smash hit Wicked), Pippin is the journey of one man seeking greater fulfillment. As “everyman,” the chosen Pippin is cast as son of medieval King Charlemagne and is tempted by The Leading Players to explore various experiences of fulfillment, always ending in failure. The troupe of players accompanies Pippin through these experiences, encouraging him to perform the one last act—“The Grand Finale.” In this setting, the spirits of the theatre come out after hours, welcomed by the Ghost Light, and put on a show that occurs each night. The spirits are always searching for a new Pippin to commit “The Grand Finale.”

Directed by AVPA Co-Director and Creative Director of Music Dr. Tony Spano, the creative team includes Lisa Michel as vocal director, Julie Carson as choreographer, Brian Cole as set designer, Sheila Silver as producer, François-Pierre Couture as lighting designer, and Alicia Simmons as costume designer. With a cast of 14 students, Pippin includes unique multimedia elements to enhance the story that is simultaneously set in the dark ages and the present day.

For more information and to purchase tickets, visit www.avpa.org.

About the Academy of Visual and Performing Arts
The Academy of Visual and Performing Arts (AVPA) at Culver City High School has been inspiring and empowering students to build a compassionate, creative community through innovative and challenging arts education since 1996. AVPA enjoys tremendous support from Sony Pictures Entertainment and other area businesses as well as from the Culver City community. For more information about the Academy, go to http://avpa.org or contact Tony Spano at 310-842-4200 x6094 or Kristine Hatanaka at 310-842-4200 x6001.

Last year Culver City High School witnessed the first student in their history to leave a female in the summer and return, in transition, as a male the following fall. One month later, the student, …[READ MORE]

You might have been involved in some other sports over the weekend, but the real action was raising funds for the high school by tossing strikes. Who could have guessed that tournament bowling would reveal …[READ MORE]