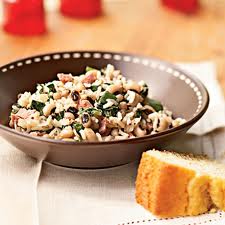 Who has not stayed up late on New Year’s Eve to count down to midnight and the ringing in of the new year? Whether you choose party in style or cocoon at home with the TV turned to the Times Square traditional big ball drop, I’m sure you’ve already made plans for how you will celebrate December 31st. Perhaps you plan to see the New Year in with thousands of others in sleeping bags and folding chairs along the Rose Parade route on Pasadena’s Colorado Boulevard. Or you may feel drawn to a more contemplative, even spiritual observance of stock-taking and affirmations for the new to come.

A few years back, my friends Ruben and Ted introduced me to their New Years tradition: a festive New Years Day brunch showcasing black eyed peas. Ruben, who grew up in the South, chose to spend the last day of the old year preparing a gourmet spread to share with family and friends on January 1st.

Black eyed peas were the most important element of this meal, Ruben explained, because eating them on the first day of the new year will bring luck for the year to come. My Texas-born father had grown black-eyed peas in our side yard garden, so I was familiar with their slightly earthy taste and great nutritional value. But I had not been aware of the long-standing Southern connection between these legumes and New Years luck until I met Ruben, born, bred and trained to cook in down home Georgia.

Eating black eyed peas on the first day of the year will bring you prosperity, he explained, because the small dry beans swell while cooking. Some families even place a dime in the cooking pot. The person who receives the dime when the peas are served is guaranteed an especially prosperous year. Other families will spread the wealth (and spare the worry about inadvertently swallowing coins) by placing a shiny new penny beneath each plate. Collard, mustard or turnip greens accompany the black eyed peas: the green leaves represent the green of dollar bills. Pork is also served, and is generally added as bacon or salt pork in with the peas and the greens as they cook. For years I thought that the pork was just for flavoring. But my research for the column led me to the symbolism behind pork’s prominent place on the table. Pork represents positive motion because pigs root forward, not back, when they are foraging. Similarly, cornbread, long a southern staple, takes on a special meaning on this day. The cornbread must be made from yellow, not white, cornmeal. Squares of cornbread at the table stand in for bricks of gold.

Canned and frozen black-eyed peas speed up the preparation of a New Years spread, but you can also simmer dried peas in the crockpot overnight. A ham hock (or salt pork or bacon), a chopped onion or two, water to cover, salt and pepper to taste, and a generous dash of seasoned pepper vinegar is all you need to add to the peas. Set it to low and let the flavors blend. I substitute a smoked turkey leg for the ham hock for health reasons; others may make this substitution for religious reasons. If you don’t have southern style pepper vinegar, substitute a couple of dried red chilis or Tabasco sauce and a dash of white vinegar. Served over rice, they become Hoppin’ John, the Southern equivalent of beans and rice.

Even without the addition of pork, salt pork, bacon or smoked turkey, black eyed peas are still a very good source of protein. Like all legumes, they are also a great source of fiber. Black eyed peas also provide calcium, vitamin A, potassium and iron. No wonder that our first president, George Washington, promoted their use.

There was no New Years day black-eyed pea tradition in the newly independent United States of America, however, despite President Washington’s support of their cultivation.

Culinary historians trace the association of black eyed peas with New Years all the way back to Rosh Hashana traditions promulgated in the Babylonian Talmud. Black eyed peas were listed along with leeks, beets and other food items to be served on this end of the year holiday. Sephardic and Israeli Jews still carry on this tradition.

In the 1730’s a group of Sephardic Jew immigrated to Georgia. It is thought that their Rosh Hashana black eyed pea tradition was adopted by their new neighbors. Black eyed peas were already in wide cultivation in the southern colonies. Native to West Africa, the legumes flourished in the warmer climate of the South. Their sensitivity to frost precluded cultivation along the Mid- and North Atlantic seaboard.

The frost-sensitivity of this legume proved to be a blessing to Southerners after the Civil War. Advancing Northern troops set fire to farms and crops on General Sherman’s historic march to Atlanta. Unfamiliar with black eyed peas, they confused them with animal fodder. The hungry Union soldiers saw little value in animal fodder, so did not appropriate stored dried black-eyed peas to their own use. Stores of black eyed peas survived the invading troops’ ravaging of Confederate resources, and provided nutritious sustenance during the Reconstruction. People with black-eyed peas were truly prosperous. Over time, a confluence of the Sephardi and Reconstructionist traditions led to the New Years day tradition Ruben and Ted celebrated with their Southern California friends.

While I thoroughly enjoyed the country ham Ruben and Ted served at the brunch, I’ve modified my black-eyed pea recipes to cut down on fat by substituting smoked turkey for salt pork or bacon. Vegetarians and vegans can use liquid smoke flavoring in lieu of meat or fowl. However you prepare your New Years Day meal, I wish you prosperity and joy in the year to come.

The Tuesday Culver City Farmers Market is held from 2 to 7 p.m. on Main Street between Culver and Venice Blvds.

Tuesday afternoon or Saturday morning, the Farmers Market is a wonderful place to buy those fresh vegetables and salad ingredients your post-Halloween treat tummy is craving. Stock up on a mix of oak leaf lettuce, …[READ MORE]

Great news for slow starters ! The Saturday morning Culver South Certified Farmers Market now has extended hours. The new hours are from 7:30 a.m. to 1 p.m., which is wonderful news for those of …[READ MORE]