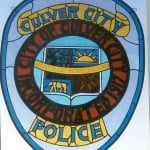 On Oct. 31, at 5:51 pm, Culver City Police officers responded to the 6000 block of Sepulveda Boulevard for a Grand Theft Auto investigation. The officers contacted the victim who said 2 male Hispanics about 25 years old, both with thin builds, and dark short hair stole the victim’s 2007 Cadillac Escalade. Also on Halloween, at 9:15 am, a victim called the station to report her vehicle had been vandalized overnight. The victim said she parked and locked her 1997 Toyota in the 4000 block of Minerva Avenue at 6:15pm and when she saw her vehicle at 9:00 am discovered her front window had been smashed out. No suspect(s) were seen.

Culver Citizen Thanks Police “Going Beyond”