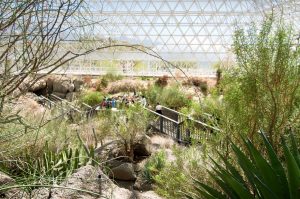 I spent the weekend in Tucson Arizona. I had a Unitarian Universalist convention and a friend’s wedding reception on the same weekend, so it was two birds with one stone, as the proverb says.

I discovered two other things when I was there; a sphere and a wall.

On the first day, I went to Biosphere 2, a science experiment started in the 80’s to see if people could sustain themselves on Mars if we (humankind) considered colonizing other planets.

My first look at this structure filled me with wonder. In the Sonoran Dessert, here in the middle of sweeping land and space, this architectural wonder appears, with pyramid and dome-like shapes, boasting 65,000 windows. Multiple structures encompassing the Biosphere gleam, otherworldly architectural forms spread out in the vast desert.

We joined a tour which explained that the prime experiment was to determine if people could grow all their own food, and through the use of plants sustain a balance of Oxygen and CO2 to live adequately within a contained environment. Not only did we experience five different types of land environments, Rainforest, Savannah, Ocean, etc, we also went below to see a massive and complex array of machinery working to make sure that the environments were maintained with heating, fog and humidity levels appropriate to those environments.

The people housed within Biosphere have to work 16 hours a day. This is to maintain all the various jobs required to keep up with the experiment. The tour informed us that while their nutritional guidelines were met, they were only eating 2200 calories which was not enough to sustain them working physically demanding jobs 16 hours a day.

We saw their housing portion, where they slept and ate, but when I asked various questions regarding the psychology of the participants living like this, I wasn’t given complete answers. One time the tour guide said, “We aren’t trained to give you those answers, but there is a book by one of the scientists offered in our bookstore.” I didn’t buy it. And I was disappointed that the tour didn’t include more about the difficulties they encountered living in this stressful environment. There is more to life than maintaining the machinery.

The Biosphere was considered a failure by many people. Twice in two years, oxygen had to be put in, when CO2 levels got too high. Other challenges occurred, like plants and animals dying, and the initial experiment was not considered a success. Later another group tried for six months without much fanfare.  The University of Arizona bought the Biosphere four years ago and is continuing the project, including starting a massive experiment in water run off and how it impacts the land and plants. It will give scientists potentially many answers to how to deal with the impact of water and erosion.

I saw it as a vision to try something fantastic and put money into building something to provide hope, possibility, and potential. It’s a monument to our ingenuity and capacity. What do we currently have that even matches the promise of this “experiment” in our world today?

Are you kidding me?

Two days later I attended a Unitarian Universalist outdoor worship service in Nogales to experience the Wall separating the United States and Mexico. As we were in a bus going to our meeting location, I started seeing the Wall in the distance, darting in and out of my view on the bus. I couldn’t believe it. I hadn’t realized. It looked very similar to another wall I had experienced, when I went to Israel and saw their version of a wall separating the land from its peoples.

The wall, like the one in Israel juts up and down according to the land. It follows the hills and valleys of the land continuing for miles, never relenting in it’s towering, overwhelming force as if to say, “I’m here! Don’t forget this division I create!”

When I was a kid I spent over 10 years going to Ensenada every Thanksgiving. Never had there been such a wall. In fact it was sort of funny how small the separation actually was. I realized as a little girl, that people could easily walk, swim or jump over and yet, many people did not. In the vastness of places like Tijuana, with it’s thousands of peoples like us, they loved their families, loved their community and didn’t choose to come to the U.S..

A few hundred Unitarian Universalists met in a parking lot across a very small road, looking at the current wall that divides our country, and began our worship service singing and gathering. We were instructed to walk along the wall about an 1/8 of mile in silence.

The Wall is a massive steel structure, not solid, with bar like beams so that one could potentially hand items across to willing people. We were informed before the walk that Border Patrol requested us to not put anything through the wall, but we could touch it and mediate next to it.

Once we arrived at our location, we were in small groups and a minister read to us an “immigrant story.” Our story was about a man with a legal green card who had been in the United States over 40 years, paid taxes, raised his children and now because of our “policies” was forced to be deported to Mexico, to care for his Alzheimer’s mother. He didn’t have the resources to fight the legal system and simply gave up coming back the the United States, to his home. He will never receive the benefits of paying taxes and working within the United States legally for all of those years. Who knows if he can ever return to see his children?

We were asked how we felt about the story and what we were going to take home with us from this experience. I honestly didn’t know. These unfair stories are happening every day. This willingness from the United States (and we’re not the only ones), to act out of fear, to clearly stay in a state of “us against them” at all costs, diminishes our capacity to further ourselves in all ways, scientifically, spiritually, economically or anything else.

If you reading this and are having a “what about this?” reaction to my story, to prove me wrong, to talk me into why Walls are important, why people need to be divided and kept away from one another, then I would invite you to think about where did that worry or fear come from? Of course there are always stories of the one person who does an act so heinous that our very sense of belief is shaken, but there are millions more who just want a chance at a better life. Fear drives potential away. Fear changes us. Fear stops everything.

The wall is a monument to fear. I refuse to give into that fear. I do not want my taxes paying for such a division. I do not want citizens of the US to live in fear that they have to make excruciating choices to leave their families.