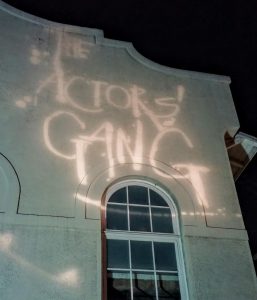 I was barely into the immersive drama of Lyrics from Lockdown when I experienced déjà vu. A black man routinely driving to work pulled over by a flashing light. Telling himself in singsong not to react, asking the officer in politely neutral language what the problem is, self soothing when the officer says it’s a broken taillight and takes his drivers license and registration back to the patrol car where minutes pile up like a trainwreck and tension held at bay strains to be loosened.

All of this in spoken word poetry, hip hop lyrics, song, an explosion of creative energy leading to my seen-this-before moment. Pulled from his car, arms jerked behind him, searched, handcuffed, perp-walked to the squad car, the officer deaf to any protests, questions or demands to know what’s going on as he heads for jail.

We’ve seen it before, on television, theater screens, read it before, heard it before, but this is going through it intimately with a personable black man who is a victim of mistaken identity and believes that matters in the American justice system. But no one, not the dressed in brown – including her hair but not her skin – public defender, who listens less well than the cop. Or the second public defender who arrives because the first is too busy to come back, or the third.

No one listens to the famous poet. Professor. Harvard graduate. Upstanding citizen with no record mistaken for a career 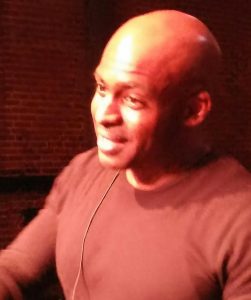 criminal because no one will take his fingerprints to compare the two.

The gradual realization as this man, absolutely innocent and counting on that counting in the American justice system, begins to lose faith as the minutes, hours, days pass in his cell, is gripping drama.

We’ve seen it, but never experienced the feeling of tightly controlled desperation, of swelling disbelief, of fading faith in things turning out all right. OMG moments that he may be convicted because no. one.cares.
This story is braided in dreadlocks with another incarceration of an innocent, of a man actually ordered released by a judge but still, today, in jail after decades inside. Both are true stories.

Playwright and solo performer Bryonn Bain’s lyrics are so powerful that director Gina Belafonte exchanged some of them for the original music of a three piece ensemble that functions as a second character in this one-man, 40-character play. Their unique sounds, also created by Bain, bridge astonishing changes, allow a breather as he metamorphoses into yet another of the characters, punctuate with music what his words are sometimes too powerful to hear.
It is an immersive experience of two men unjustly incarcerated in American’s unjust justice system, performed with raw emotion in a dazzling mix of styles by a supremely talented man.