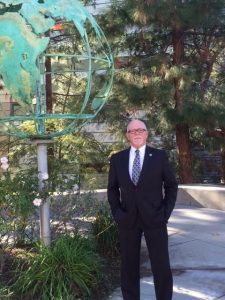 “I have to tell you, Los Angeles can be intimidating; millions of people, miles of structures, all that traffic. I started my administrative career in a town in Montana that had four stop lights. But this position really called to me, and I have to say, I’m very glad to have accepted it.”

As the president of West Los Angeles College, Dr. Jim Limbaugh knows that people have a reaction to his last name. The notorious talk show host is, in fact, a distant cousin. “The family split up several generations ago, his branch stayed in Missouri and mine struck out for Texas. Other than the last name,” he offered a subtle smile,” we don’t have much in common.”

Talking on a very quiet campus – winter session was over, the next semester had not yet begun – Limbaugh was aware of how much WLAC is in need of leadership and commitment. “My assistant has been at her job for seven years, and she has had five different bosses. That’s a lot of change. Without consistent attention, problems don’t get resolved, and programs don’t get built.”

The subject of crosstown rivalry came up, and while WLAC can offer students much of the same community college coursework they get at Santa Monica College, he knows it lacks the long term reputation of SMC. “We need to reach out to those students who could find more options here.”

Limbaugh noted that while LAUSD has a program that offers all of it’s graduating high school seniors a year of community college for free, “I can’t make the same gesture to Culver City – not yet.” The hope of building up the current scholarship foundation or creating a new program to fulfill that need is high on his list.

He is also acutely aware of the precarious situation of the DACA (Dream Act) students, who are suddenly in danger of losing their legal protections, and the economic hardships of many on campus. “People attending community colleges, most particularly young people, are just trying to find a foothold to help them up.” The institution’s aim is to “define a direction that builds on it’s strengths, keeping students at the center.”

Noting that the college and the campus have resources that are not being used at capacity, Limbaugh is in the process of creating connections with Culver City, and looking forward to a campus working at full steam. “I’m just starting my second semester, and I’m really looking forward to it.”