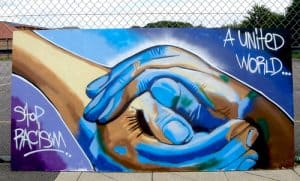 The past week has sent many of us reeling – Police committing murders, mass shooter, the now-usual media turmoil over framing the coverage. The bad news has been heartbreakingly bad. But the good news is that we now have a moment to really shift our culture, and we can do that by taking individual actions. The problems are not new – what’s new are the cameras and the social media platforms, where we can profess, not just as allies but as witnesses, our commitment to change.

The first time I was ever conscious of being physically in the minority was when I got off the plane at Honolulu Airport. I was 16, traveling alone, and suddenly surrounded by Asians. My bright red hair and glowingly white Irish skin looked almost cartoonish, in a terminal crowded with people sporting raven black hair. No one was verbally cruel or even physically aggressive, but it seemed most of the people who saw me recoiled slightly, with an annoyed look of “What are YOU doing here?” I recall thinking to myself, ok, this is what minority feels like. That was a moment.

Years later, I was out on a very late night date. We’d been listening to music and decided to get some food, so we headed over to Jerry’s Deli in the Marina. The hostess looked us over with a bit of smirk. My guy – tall, very dark and handsome – asked “Table for two? “ and even though there was plenty of room inside, we were escorted out to the side patio and given a table in the chilly outside space. We looked around and realized that everyone else seated outside in this area was also an interracial couple. We laughed, but the length of time we waited to be served was – for me – extraordinary. That was a moment.

And as several friends of mine have noted, they have those moments daily or weekly not once every other decade. There is no choice for them to elude racism, there is simply the option of how to deal.

What I have noticed over the last week has been a lot of people just being kind. A very simple hello, making eye contact with someone you might have simply walked past, offering a comment or a compliment. While I tend to use “y’all” as my third person plural (because it’s gender neutral) I also recognize the “y’all” from a white person could be a verbal red flag for a person of color.  I’ve asked myself to become more conscious of when I’m being racist, and to offer more – more manners, more respect – to people who are used to being offered less.

After the riots in 1992, I had to go to the store. Venice was one of the few parts of the city that had seen house to house fighting, and many whites had fled. I’d been almost alone in my neighborhood for days, and I was out of coffee, out of bread. The National Guard had left the beach, and things seemed quiet. Not the weird quiet of empty streets and houses, but the gentle quiet where the occasional bird dared to sing. Where a truck came to deliver bread.

I only saw a few people, along streets that were usually teeming with traffic. And everyone I saw, we greeted each other like long lost friends.
“How are you? “
“Hey, doing alright? “
“Everything going good today, sister?”

I smiled and spoke and waved, all of us taking pleasure in the simple act of walking down the street. That was a moment. While I knew the upheavals ahead of us could easily be as brutal as the one we’d just endured, as long as we remembered to be kind to each other, we would get through it.

Time is not made up of days or hours or minutes, but of moments. Hey, you might be having one right now.