Throughout this school board campaign, one of the primary questions about Kelly Kent is “Who is she?” and “What is her experience working with our Culver City schools?” These are questions I am uniquely positioned to answer, and I believe that my perspective may be of benefit to the electorate, who are being asked to select candidates in our upcoming local election.

For well over a year, I have worked with Kelly day in and day out to jointly create the new Spanish language program at Lin Howe. From a germ of an idea and a dream, we founded a program that has become so popular, we are struggling to expand fast enough to accommodate everyone who wants to join.

The program was born from the fact there is a tremendous desire from Culver City families to give their children access to a second language at an elementary school level. For decades, the only way to accomplish this was by getting a kindergarten spot in one of our highly regarded immersion schools, but space is limited and there are long waiting lists. This fact was driven home twice in the past month, while Kelly has been on the campaign trail:

First, when an Ask2Know high school student asked the school board candidates, “Will you work to make second languages a reality at all of our elementary school sites?” and dozens of students stood up in support.

Second, during the Culver Crest forum held at El Rincon, when local parents expressed a strong wish for their children to have access to a second language while in elementary school.

Families who can’t get a place at an immersion school usually end up at their home school, 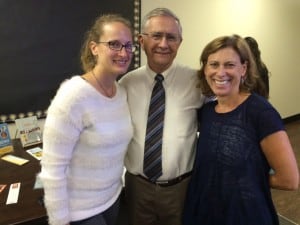 which for Kelly and myself is Lin Howe. We quickly discovered that we love our home school, and thrive on the benefits of participating in our local community, such as walking to school and having classmates who live down the street and around the corner. Kelly and I are passionate about Lin Howe, and we believed that second language instruction could be possible with parent support and hard work. Hence, the Spanish Language Program was born, which is now funded not only by our Boosters, but by our school site and with support from the District, because we are also serving our ELL students.

If people could see the focus, dedication, and countless hours of time that Kelly put into every detail — from researching the best curricula, to persuading our native Spanish speaking parents to get involved and teach, to photocopying and assembling lessons plans at midnight the night before classes — people would know exactly who Kelly Kent is. Supremely intelligent, dedicated, tireless, persuasive, collaborative and, quite simply, someone who gets the job done without fail, even when there is no road map.

In addition to co-creating the Spanish program, Kelly is an extremely active PTA volunteer, teaches Growing Great nutrition to our students, and leads many of our school beautification efforts. I know she can tackle anything, especially our $106 million bond, with integrity, fairness and true fiscal responsibility. Combine these attributes with her professional expertise as a neuroscientist, experience as an educator of both adults and children, her service to the city via the Parks & Rec Commission, and her stellar endorsements, and it becomes clear that Kelly is an outstanding school board candidate, with skills, perspective and values that will serve our district well.

Speaking of the bond, after the infrastructure improvements get underway in Summer 2016, more than three years will remain in our new school board members’ term. I know that Kelly Kent will be working for the long haul, dreaming of ways to improve our district, and then making them a reality. It’s just who she is.