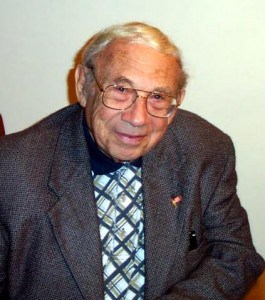 Syd Kronenthal, Culver City’s long time Parks and Recreation Director passed away on Sunday, October 18, 2015, and left behind a community deeply imprinted with his passion for people, creativity and fun.

The Wednesday memorial service at Hillside was attended by many friends and colleagues who spoke warmly of his 52 years of service to the city. His niece Carrie Ginsberg began the service by noting, “There are a few of us who can make the biological claim to the title “Uncle Syd” but Culver City knows, he was everyone’s Uncle Syd.

While Kronenthal had a huge influence in the shape of the Parks and Recreation system – he was known as the driving force behind the bond measure that financed the Veteran’s Memorial Auditorium – he was always more concerned with people than with buildings. As the head of a department called Parks, Recreation and Social Services, his mission in life was to give everyone the chance to connect with like minded souls for greater good.

Former Mayor Paul Jacobs spoke eloquently about Kronenthal, and the decision to rename McManus Park as Syd Kronenehal Park, even with Syd still employed at the department. A video of the occasion was played at the service giving everyone living memory of that moment.

As the longest serving city official in the history of Culver City, Kronenthal was a force of nature and a a great mentor. Mike Cohen spoke of what an important influence Syd was on his life. “He allowed me to spread my wings for 20 years at the Recreation dept. and we stayed close for 20 years after.”

Known for his long-winded remarks at city meetings, Cohen quipped, “Syd needed no introduction.  What he needed was a conclusion.  City council members not only looked at their watches, they shook them.”

From 1946 to 1998, Kronenethal spent his life developing a growing parks and recreation system, a career that spanned the administrations of 10 U.S. presidents. He has attended more than 10,000 city meetings and left a lasting impression on thousands and thousands of Culver City residents, whom he called his family.