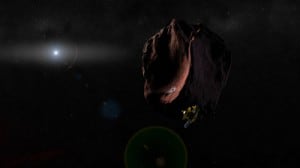 NASA has selected the potential next destination for the New Horizons mission to visit after its historic July 14 flyby of the Pluto system. The destination is a small Kuiper Belt object (KBO) known as 2014 MU69, which orbits the Sun nearly a billion miles beyond Pluto.

“Even as the New Horizons spacecraft speeds away from Pluto out into the Kuiper Belt, and the data from the exciting encounter with this new world is being streamed back to Earth, we are looking outward to the next destination for this intrepid explorer,” said John Grunsfeld, astronaut and chief of the NASA Science Mission Directorate at the agency headquarters in Washington.

The 2003 National Academy of Sciences’ Planetary Decadal Survey strongly recommended that the first mission to the Kuiper Belt include flybys of Pluto and small KBOs, in order to sample the diversity of objects in that previously unexplored region of the solar system.

Early target selection was important; the team needs to direct New Horizons toward the object this year in order to perform any extended mission with healthy fuel margins. New Horizons will perform a series of four maneuvers in late October and early November to set its course toward 2014 MU69, which it expects to reach on January 1, 2019.

“2014 MU69 is a great choice because it is just the kind of ancient KBO, formed where it orbits now, that the Decadal Survey desired us to fly by,” said New Horizons Principal Investigator Alan Stern, of the Southwest Research Institute (SwRI) in Boulder, Colorado. “Moreover, this KBO costs less fuel to reach [than other candidate targets], leaving more fuel for the flyby, for ancillary science, and greater fuel reserves to protect against the unforeseen.”

Finding a suitable KBO flyby target was no easy task. Starting a search in 2011 using some of the largest ground-based telescopes on Earth, the New Horizons team found several dozen KBOs, but none were reachable within the fuel supply aboard the spacecraft.

The powerful Hubble Space Telescope came to the rescue in summer 2014, discovering five objects, since narrowed to two, within New Horizons’ flight path. Scientists estimate the average diameter of 2014 MU69 to be about 30 miles.

The Kuiper Belt is a disk-shaped region in the outer solar system, lying beyond the orbit of Neptune and containing thousands of small, icy celestial bodies. Its existence was predicted in 1951 by the Dutch-born astronomer Gerard Kuiper. In 1992, after five years of searching, astronomers David Jewitt and Jane Luu discovered the first KBO.

Unlike asteroids, KBOs have been heated only slightly by the Sun, and are thought to represent a well preserved, deep-freeze sample of what the outer solar system was like following its birth 4.6 billion years ago.

The New Horizons spacecraft—currently 3 billion miles from Earth—is just starting to transmit the bulk of the images and other data, stored on its digital recorders, from its historic July encounter with the Pluto system. The spacecraft is healthy and operating normally.