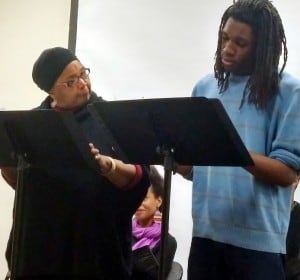 The Mayme Clayton Library & Museum on Overland Avenue appeared full Saturday afternoon, the seats filled with nearly 100 fans of African American poet Langston Hughes, who would have been 113 years old on Sunday. Hughes, celebrated as one of the first and most famous American of African descent authors, wrote his first published poem at 17: “The Negro Speaks of Rivers.” It is still his best known.
Hughes pioneered using dialect and the colloquial vernacular in his poems, short stories and Broadway plays. He wrote of the common man; the unknown, unfamous, unsuccessful residents of black American communities, and was criticized for it by those who wanted stories about successful role models. Child of a broken marriage and mixed heritage, descended from protesters against racial prejudice and shuttled from home to home for much of his childhood, he drew his material from this mixed stew and produced insights into the life of the common Negro, venturing into the black cause as it emerged from the Depression, World Wars and Civil Rights movement.
One of his early books was “Not Without Laughter,” which he wrote at 28. His keen ear for dialogue and rapier wit got his work published in The New Yorker as well as newspapers and periodicals and brought him prizes like a Guggenheim Fellowship, awards and fans.
“He’s one of my favorite authors,” said Harrison Miles, who attended from Whittier. “He wrote about how groups of people relate, how reality and perception color everything.”
Fans also included a small band of actors who celebrated Hughes, including Sharif Atkins( of ER and White Collar fame,) Scott Lawrence (of JAG and Avatar,)  and others from the Lower Depth Theatre Ensemble and Skylight Theatre Company, who relished reading Hughes’ powerful, funny and insightful works.
The performance of “Thank You, Ma’m” was a showstopper. The story of a would-be purse thief (Noah Murtadha) who picked the wrong victim, Mrs. Luella Bates Washington Jones, played wonderfully by Wanda-Lee Evans (both pictured above) the thief is thoroughly wrung out, dried and sent packing by his intended victim with a full belly, strict advice on the perils of purse snatching and a perk that totally discombobulated him. Hughes fans loved it, and those unfamiliar with his work were converted.
There was even a cake for the celebrated African American writer, activist and innovator, which did not have 113 candles, but was a fitting way to follow the rousing performance of “America” by the whole cast.
Library archivist and volunteer coordinator Cara Adams said the performance was one of a half dozen events a year hosted by the library, which include jazz concerts and movies from the extensive collection of archival materials collected by Mrs. Clayton and housed in the former county courthouse.
“We have more than two million items,” she said. “So far, we’ve processed 15,000.”
The Mayme Clayton Library and Museum at 4130 Overland Avenue is open Fridays and Saturdays from 10:30 a.m. to 4:00 p.m. The collection includes rare archival and contemporary African American music, books, photographs, posters, LP records, movies and publications from the NAACP to the Black Panthers. Go to www.claytonmuseum.org or call 310.202.1647 for information.