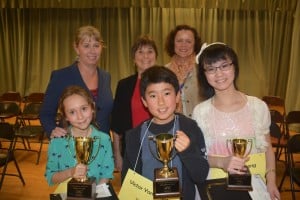 Camille Cosato stood tall and confidently spelled the word P-R-E-V-I-O-U-S to take home the 10th Annual Culver City Unified School District Spelling Bee title on February 2 at Linwood E. Howe Elementary School. The fourth-grader from Farragut Elementary School finished atop 23 other spellers – four students from each of the district’s five elementary schools and Culver City Middle School competed.
There was plenty of drama as the final two spellers – Cosato and El Rincon’s Victor Yamamoto – missed the same word several times. Tough words like “hieroglyphs,” “immobilize” and “forbearing” tripped them both up before Yamamoto missed the word “villain,” and Cosato correctly spelled that word and the word “previous” to take home the title.
Cosato also took home a first-place trophy and a $200 cash prize courtesy of The Fineshriber Family Foundation, which sponsored the event. She will advance to the Los Angeles County Spelling Bee, which will be held at 4 p.m. on March 25 at Almansor Court, 700 S. Almansor St., in Alhambra. The winner of that competition will advance to the statewide spelling bee in Sonoma in May.
Marcia Antopol, executive director of The Fineshriber Family Foundation, also presented a trophy and $150 in cash to second-place finisher Yamamoto; and a trophy and $100 in cash to third-place finisher Clarissa Cheng of Culver City Middle School.
In addition, each participant received a certificate of commendation signed by the District’s superintendent congratulating him or her on reaching the Spelling Bee finals.
The CCUSD Spelling Bee will be broadcast on local television on Channel 35.
Congratulations to all of the Spelling Bee finalists: