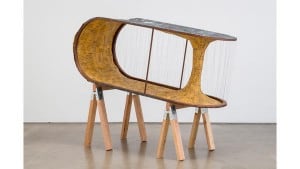 Want to do some time travel? Find a wormhole. That’s the tunnel in the space-time continuum that connects two disparate points — and a plot device for countless works of science fiction from “Star Trek” to “Contact” to “Interstellar.” It’s also the inspiration for a new work of sculpture by Los Angeles artist Glenn Kaino. He’s crafted an artistic rendering of one of these space-time portals — which, incidentally, are theoretically possible.
Now on view at Honor Fraser gallery in Culver City, Kaino’s 2014 piece, titled “As Far Away As a Minute,” is made from wood and dozens of used sandpaper pieces that he harvested from friends’ studios, autobody shops and wood-working spaces.

Sandpaper is a material that Kaino finds fascinating for a variety of reasons.

“There are the traces of the human gesture that it retains,” he says. “All of that activity, all of the folding and unfolding.”

But it’s also a material with some art historical significance. In a 1959 book titled “Mémoires,” artists Guy Debord and Asger Jorn created a book whose cover was made entirely out of sandpaper. “The idea is that every time it was removed from the library,” Kaino explains, “it erased all of the knowledge around it.”

In stitching all of his pieces of found sandpaper together, Kaino says they began to resemble a theoretical map of space, which is often depicted as black space overlaid with a grid. (The artist has a long-running interest in cosmology, which he studied as an undergraduate at UC Irvine.)

“I thought [the sandpaper] presented the perfect opportunity to create a wormhole,” he says. “You had the multiple hands of the artisans who had handled the sandpaper, followed by this guiding ambition to create an artistic gesture with that gesture, which then ends up folding back in on itself.”

For his piece, Kaino pored over various theoretical models for wormholes, which he turned into a sculptural work with some assistance from physicist and origami master Robert Lang.

Like a real theoretical wormhole, Kaino’s piece is fragile, consisting of gingerly quilted bits of sandpaper tied to a wood frame and resting on sawhorses — a powerful theoretical concept constructed out of the most ordinary of materials.

It can’t be used for time travel. But it’s a good piece with which to imagine the possibilities.

“As Far Away As a Minute” is on view at Glenn Kaino’s solo exhibition “Labyrinths” at Honor Fraser through Feb. 14. 2622 S. La Cienega Blvd., Culver City, honorfraser.com.