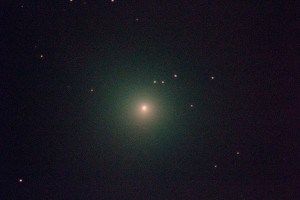 Comet Lovejoy, already being tracked by backyard astronomers worldwide, is entering its best and brightest two weeks for viewing. From about January 7 through 24, the comet is predicted to be glowing at 4th magnitude—bright enough that skywatchers with clear, dark skies might be able to just glimpse it by eye, without optical aid. And the early-evening sky during this time will be dark and moonless, allowing the best views.

On January 7, Comet Lovejoy passed closest by Earth at a distance of 44 million miles, nearly half the distance from Earth to the Sun. But its distance will change only a little for many nights after that, so you’ll have plenty of opportunities to track it down.

“If you can find Orion shining high in the southeast after dinnertime,” says Sky & Telescope magazine’s senior editor Kelly Beatty, “you’ll be looking in the right direction to track down Comet Lovejoy.” From there, use Griffith Observatory’s sky map to find the right spot for each date:
www.griffithobservatory.org/events/Comet_Lovejoy_2014.html

During the next two weeks, the comet crosses the constellations Taurus, Aries, and Triangulum, climbing higher and higher in early evening. It passes 10° to the right (west) of the Pleiades star cluster on the evenings of January 15 through 17. Although by then Comet Lovejoy will be receding from Earth, it doesn’t come closest to the Sun until January 30, at a rather distant 120 million miles. By that date, moonlight will begin to interfere, and the comet should be starting to fade as seen from Earth’s point of view.

This is the fifth comet discovery by Australian amateur astronomer Terry Lovejoy, and he found it in images taken with his backyard 8-inch telescope. It’s a very long-period comet, meaning that it has passed through the inner solar system before, roughly 11,500 years ago. Slight gravitational perturbations by the planets will alter the orbit a bit, so that the comet will next return in about 8,000 years. Astronomers have given it the official designation C/2014 Q2.

Based on its steady, uninterrupted brightening, observers estimate that the comet’s solid, ice-rich nucleus is at least 2 or 3 miles across, slightly larger than typical for comets. But the glowing object we actually see is vastly larger and less substantial than the nucleus. The comet’s visible “head,” or coma, is a cloud of gas and dust roughly 400,000 miles across that has been driven off the nucleus by the warmth of sunlight.

Human eyes can’t perceive color in dim nighttime objects well, but photographs show that Comet Lovejoy has a lovely green hue. The green glow comes from molecules of diatomic carbon (C2) in the coma that fluoresce in response to ultraviolet sunlight. By contrast, Comet Lovejoy’s long, delicate gas tail is tinted blue, thanks to carbon monoxide ions (CO+) that are likewise fluorescing.

In addition, dust in a comet’s coma and tail simply reflects sunlight, so dust features appear pale yellowish white. The most memorable comets tend to have dramatic dust tails, such as spectacular Comet Hale-Bopp in 1997 and another discovery by Terry Lovejoy, C/2011 W3, in 2011.

Photo credit – This image was made with the historic 12″ Zeiss telescope at Griffith Observatory by Astronomical Observer, Anthony Cook, January 5, 2015.