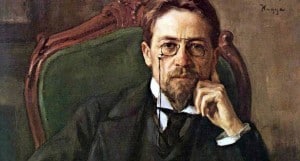 If you were not at the Black Box Theater on the CCHS Campus last weekend to see “The Seagull” this weekend Anton Chekov will give you another chance.

Chekov is a challenging playwright, and this early work is a classic with all the trimmings – A Russian country house by the lake, a family with money issues, a few spouses, a few lovers, and the constant craving to be an artist.

The Blurred Vision Theater Company took on the comic drama with full wingspan, and turned out a thought provoking performance. Ryan Gacula, in the leading role of Konstantin, took full measure of the anguish of a struggling writer, whose need to turn out great theater prevents him from creating anything at all. Paxton Amor plays Nina, an actress whose need for creativity leads her into difficult territory.

Rotating around them are Konstain’s mother Irina, a stingy and vain actress whose artistic success has made her son feel unworthy, and her lover, the writer Trigorin, a man so compulsive about his art that he takes notes in mid-conversation so that her can use them later. Played by Mikaela Barocio and Samuel Petersen, respectively, the characters illustrate artistic accomplishment veering into narcissism.

In an even wider spiral around them. Illya, Irina’s brother, his wife Polina and his daughter Masha (Oliver Berliner, Monkia Elmont and Carly Shiever)  inhabit the space of regret, acceptance and unhappiness in turn. Dr. Dorn, the local physician (Reno Behnken) gives philosophical prompts to all and sundry, and Semyon, a local schoolteacher (Thanassis Tetradis) sighs over poverty and desire.

It’s a play built on monologues, with most of the characters given at least one chance to stand and declaim their point of view at length. Is it all about love? Art? Money? Status? Arguments are made for each, but Chekov wisely allows the audience to decide where they would place their bets.

A drama with comic moments, the best laughs are grabbed by Barocio and Elmont, both playing women for whom being candid is a calling. Gacula and Amor did a creditable job with some very heavy theatrical lifting; being a young artist onstage talking (at length) about art there is a risk of getting lost in a hall of mirrors. The whole company does well, and the supporting roles showed the kind of polish and attentiveness that Chekov requires. Petersen’s Trigorin does such a good job of being so distant and self involved we only wonder what it is all these women see in him; but of course,  he’s a writer, and that takes us back to the central question of the play.

Is is about art? or status? or money? or love?  See “The Seagull” this weekend and decide for yourself.

For tickets, go to www.avap.org.

For more information about the show or to purchase tickets in advance, please visit www.avpa.org.