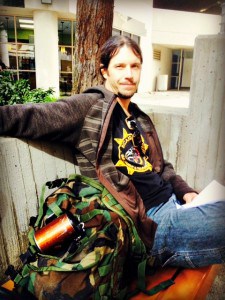 When AULA student, David Mix, says that “relationship based convergence” is what motivates his studies and his work on the Pine Ridge Indian Reservation in South Dakota, you know he isn’t speaking lightly. In fact, the way that David connects ideas, as well as his pursuit of a more socially responsible life, seems to have guided him for quite some time.

This past week, David was one of the AULA graduates awarded a Master of Arts in Urban Sustainability. In this program, students explore the connection between sustainability and inequality. They learn to advocate for the disenfranchised, and to empower communities to become active participants in the decisions that shape their world. David seems to have truly incorporated this into his life … and clearly nothing he has done in his academic career has been without deep thought and fortitude.

What began as a search for his own native ancestry led David to a project called the Thunder Valley Regenerative Community Plan, a project of the Thunder Valley CDC to develop housing for the Oglala Lakota Nation on the Pine Ridge Indian Reservation in South Dakota. The mission of the organization is, “Empowering Lakota youth & families to improve the health, culture and environment of our communities, through the healing and strengthening of cultural identity.” David began and continues to work on this project to help resuscitate a local economy through new housing in a community where homes are so scarce that three or four families often have to share one and two bedroom trailers.

Serving as development coordinator for the Thunder Valley CDC after his one year internship, while also completing his studies at AULA, has been a whirlwind. But it’s been worth it. The Thunder Valley Regenerative Plan was a recent finalist for the Buckminster Fuller Institute 2014 Challenge where designers, architects, activists, scientists and others submit game-changing solutions to solve humanity’s most pressing problems. Teams must use a broad systems approach to the problems they are tackling. Leaders of the project will be flown to New York City for the awards event.

When asked about how AULA impacted him personally, as well as his work on this project, David described the Urban Sustainability program as tremendously rich, and added that the AULA experience lets you go as far as you can envision. He said, “You have to take responsibility for your own volition and your own learning. The resources here are extraordinary.” Of his future plans, David said he will pursue a professional role in sustainability projects. Yet with all that has converged to bring David these recent accomplishments as well as the completion of his masters program at AULA, it’s unlikely he will do anything that is less than well thought out and fully wówačhiŋye—the Lakota word for being a dependable, responsible person.