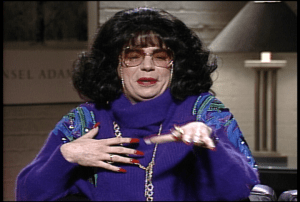 “Verklempt” is a Yiddish word meaning, “choked up with emotion.” This particular term came into “common” American English usage via a Mike Myers’ Saturday Night Live skit called “Coffee Talk” in the 1990’s. You can channel YouTube and see clips from some of the funniest episodes, including a most memorable show featuring Barbara Streisand.

I use the term liberally in my day to day speech, ultimately immersing some of my non-Jewish friends, acquaintances and colleagues in enough Yiddish to understand the term. It is mostly used at times when, in the middle of a conversation, something catches you on such an emotionally gut level that you become speechless. I often have been known to generalize “verklempt” to include times when any of us become frozen, stunned, and subsequently incapable of functioning at our highest level of energy and ability to execute.

I am no psychologist, but I am an observer of people, and, especially through my voice here in Ruth’s Truths, I  want to share with my audience when I feel one of my light-bulb-on-switching revelations coming on.

Last week, I felt verklempt. That week was a gap week between a completed 10-month school year, during which every break and vacation had been filled with activities and/or travel. The minute the school year ended, I set off for two weeks to accompany my son to Israel, and then came back to deliver a six-week summer enrichment program. Highlights of my non-work hours during the summer included: worrying about my son, who remained there throughout the Gaza “situation.” Back at home, I was interviewing for new job opportunities, whilst maintaining an extreme dance diet of four or five nights a week. I wasn’t sleeping much, coming home past midnight from the dance events, and not shutting my eyes until I’d taken my daily dose of FaceTime with my far-flung first born. I’d then wake up half an hour before my alarm, nervous.

I am aware that I just described a very privileged and entitled life scenario. Imagine what could become of a person with much more serious problems. People my age often have elderly care to worry about, personal health issues, and employment searches without the comfort of an existing job, not to mention many more critical challenges of life. Having said that, I wasn’t actually feeling stress through the summer itself. My mind was filled by and with activities my students, after which I’d come home and cook for myself and others, then change into my dance togs and set out for the evenings.

The thing I found interesting was that I felt verklempt, blocked, and like I had a cloud over my head, the week AFTER my two “issues” got resolved! During the last week of my summer school program, my son came home safely, thank G-d, and I found out that I’d been successful in my quest for what has already turned out to be a fantastic new job! I realize now that I’d been so focused on the two outcomes, that I didn’t think past them. This happens to college students, too, and is a pitfall to consider.

In hindsight, I think I, too, had been a victim of verklempt-ness, when I graduated from UCLA. I was so driven, so goal-oriented for four years straight, that when I graduated, I had no firm plans. I cast around for a few years on a variety of non-career-oriented office jobs, and unwittingly limited my choices for the future by doing things like getting married at too young an age, and not considering graduate school as an option at the time.

Last week included what should have been six carefree days to take care of matters I’d been putting off for a while. I actually had a health issue, a family issue, a repair issue, and a real estate/financial issue that I could have handled with ample time that week. I’m saying, it was the ONLY week I had off, to myself, ALL YEAR. It was an unpaid week between my two jobs, when, even if I wanted to work on transitioning, school was…closed! I wasn’t needed just yet. And this is my point: I didn’t do ANY of my errands that week! I couldn’t even think of them, I couldn’t even make one of my famous “to do” lists. I was verklempt by the fact that two huge goals had been obtained, and I hadn’t thought about what I needed to do AFTERWARDS. I was hoist by my own petard. Stunned, by my own double-edged sword of being, sometimes, too goal-oriented.

After my first day of work at the new job, I felt alive again. I was needed, I had a place to be, and new goals to achieve. I found that the pall hanging over me (verklempt-ness) lifted. I loved was energized by new challenges, which spurred me into action in other parts of my life as well. Once I found out my new work schedule, I set about making an appointments to take care of all my errands every day after work, and on Saturday. My ” to do” list now significantly reduced, I am ready to start a new school year, and the new chapter in my life. I took from this that “to do” lists, a.k.a. responsibilities are living, breathing, ongoing works in progress. But without the wherewithal to attack and prioritize, you can get stuck, mired, verklempt, and unable to proceed.

So, the question remains, what if you are verklempt, for whatever reason, and feel like you have no way to jump start yourself again? The answer is that you must engage in doing something you love, something that you are good at doing, and, preferably, something that others appreciate. Feeling appreciated makes you want to do more, for yourself, and for others.

In my ten years teaching, I have seen many verklempt students. Many of the students were suffering over much more serious situations than I, or we – those of you who read my essays – have ever experienced. So how can we possibly expect our verklempt students to execute their school assignments successfully? We must find their strengths, their gifts, and discover ways to allow them to use those strengths to feel appreciated and successful. Success in one area breeds success, or, at least, satisfaction, in others.

And how did I become so goal-oriented? So able to find my own inner motivation? It happened in high school, and I still remember how. When I was in 11th grade, I had the opportunity to satisfy my PE requirement with a class entitled, “I hate PE.” It was a new, experimental, touchy-feely 1970’s effort at getting people to express their feelings. I had been a B/C student to that time, despite the fact that I was a member of what was then known as the “accelerated track.” In the day, students were tested in elementary school, and their school career there forward was divided into three so-called “tracks” (this term and concept is now considered blasphemy in the education world). The teacher of “I hate PE” was the high school’s basketball coach, Mr. Anderson. He had us sitting on old sofas and bean bag chairs, and his goal was to turn us on, to make us goal-oriented. I did not know anyone else in the class; it was a 10th-12th mixed grade class of neer-do-well’s, kids into vices of which I had no ken.

When it was my turn to share, I told the group that I wanted to become fluent in Japanese. Mr. Anderson asked me what I had to do to achieve that goal. I answered that I had to get to Japan. When he asked me how I wanted to do that, I said I needed to get into UCLA, so I could go on their Education Abroad Program. He wanted to know what I thought I’d have to do with my high school career from that moment on, in order to get into UCLA. I resignedly stated that I’d need all A’s from that point forward, and that it’d be hard to do. That’s when he told me, “hard is good.” He later took us on an outing to Santa Monica beach, and I recall writing that mantra into the sand with my finger; I’d already turned myself around. Then and now, it seemed miraculous, but I earned straight A’s in every class from then on. I graduated with CSF honors, went to UCLA, and to Japan. The rest of my story is told in my other essays. I didn’t actually feel like I was putting that much more effort into my work; it was more a matter of having learned to believe in myself. It might not work this way for everyone, but I believe that it can. What I can’t accept is negativity. I don’t know “no.” And I can’t tolerate “can’t.” From Seussical, “Anything’s possible.”

The new team I am working with is dedicated to providing this kind of hope to students of all ages who may have become verklempt somewhere along their path of life. We are dedicated specifically to finding the key that unlocks achievement. Of course, all educators are dedicated to this same purpose, but we are specialists among specialists. If I thought I’d found my life’s work before, first in the travel industry and then in classroom teaching – wait, I’m so verklempt, give me a minute, talk amongst yourselves – you ain’t seen nothing yet!