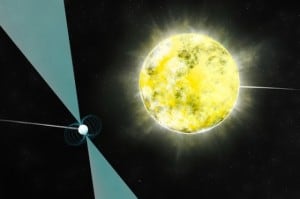 “Up above the world so high, like a diamond in the sky….” A team of astronomers, using multiple telescopes, has identified the coolest, faintest white dwarf star known. White dwarfs are the extremely dense end states of stars like our Sun: after their nuclear fuel is exhausted, they collapse from the size of a star (about 1,000,000 miles across) to the size of the Earth (7,000 miles across). This white dwarf, located in the constellation Aquarius, is so cool that its carbon has crystallized, and crystallized carbon is…diamond! In other words, this star is one very big, Earth-sized diamond, with a mass similar to that of our Sun.

The path to this discovery began when Dr. Jason Boyles, then a graduate student at West Virginia University, identified what astronomers refer to as a millisecond pulsar in this location, using a radio telescope.

This pulsar, or spinning neutron star, is the 20-mile-diameter collapsed remnant of a star that was originally many times more massive than our Sun. Known as PSR J2222-0137, which simply identifies its position in the sky, it is spinning more than 30 times a second. Its orientation is such that as it spins, a beam from its magnetic pole sweeps repeatedly past the Earth, giving rise to regular blips of radio waves. (The pulsar is detected only in radio waves, not in visible light.) The observations also revealed that this pulsar is gravitationally bound to a companion star: the two orbit around each other every 2.45 days. This companion object appears to be either another neutron star or, more likely, a remarkably cool white dwarf.

The distance to the pulsar was already known from parallax measurements made by Dr. Adam Deller at the Netherlands Institute for Radio Astronomy. Parallax, which utilizes the motion of the Earth around the Sun, is the “gold standard” for determining distances to astronomical objects. At only about 900 light-years away, this is one of the closest neutron stars known.

Knowing the distance is crucial for calculating the intrinsic brightness, and therefore the temperature, of the stellar remnants. And as the lead author of this paper, Prof. David Kaplan, remarked, “These same observations also pinpointed the position of the pulsar extremely precisely.”

Next, they searched for visible and infrared evidence of the companion, using the Southern Astrophysical Research (SOAR) telescope in Chile and the Keck telescope in Hawaii. With their knowledge of the distance of the pulsar, the team was able to calculate how intrinsically faint the companion object is. But nothing could be seen at the position of the pulsar and its white dwarf companion! As Bart Dunlap, a graduate student at the University of North Carolina at Chapel Hill and one of the team members, said, “Because of the radio observations, we know exactly where to look, so we pointed SOAR there and collected light for two and a half hours. Our final image should show us a companion 100 times fainter than any other white dwarf, orbiting a neutron star and about 10 times fainter than any known white dwarf—but we don’t see a thing. If there’s a white dwarf there, and there almost certainly is, it must be extremely cold.”

Cold as stars go, that is. The researchers calculated that the white dwarf’s temperature would be no more than a comparatively cool 3,000 degrees Kelvin (2,700 degrees Celsius).