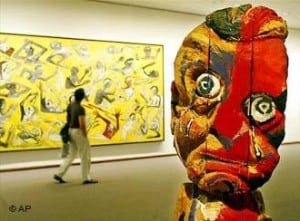 Competing Utopias is a design collision that should never happen. But somehow, in Los Angeles, in 2014, twenty-five years after the fall of the Berlin Wall, it will.

This installation is a ‘mash-up’ in the most provocative sense of that word. Its force comes from the collision of two design cultures that have been kept apart but have been visually connected in ways yet unexamined. What we propose is an experimental installation that presents Cold War modern design from East and West in one context.

Neutra VDL Studio and Residences is located at 2300 Silver Lake Boulevard in Los Angeles. The exhibit will open July 12 from 6 to 10 pm, and run through September 13, 2014. Admission is $10 on Saturdays, when there are docent-led architecture tours of the house. The suggested donation on other days is $10. Related events are free with donation to the VDL House.

Competing Utopias is organized by two Los Angeles institutions: the Neutra VDL Studio and Residences and the Culver City based Wende Museum and Archive of the Cold War, each a different type of museum. The Neutra House is an iconic Los Angeles mid-century modern house museum, designed by Austrian born American architect Richard Neutra. The Wende Museum is the largest archive of Cold War artifacts in the world. Both ‘institutions’ originated in German speaking Europe, both subsequently landed in Los Angeles. Their collections embody two forks of a Cold War history.

The Cold War was fought not just with guns, but also with art, design, and culture. Who would formulate the vision for the future of humanity? Twenty-five years after the fall of the Berlin Wall, historians, curators, and artists are investigating the divisions between East and West in their visual expressions of modernity — how were they different and how were they similar? Form knows no political boundaries or foreign languages — in this most basic sense the ‘cultural Cold War’ was a truly global competition of ideas and ideals.

The strength of this installation comes from its simplicity; that a cultural disruption is arranged by just a few simple acts. All of the objects from the Neutra House will be removed and Cold War objects from the Wende collection will repopulate the home: chairs, tables, lamps, phones, pictures, books, cooking utensils and even Stasi surveillance equipment, to be stand-ins for the removed originals. While the installation will not have any physical labels in order to provoke an unimpeded conversation about the contrasts and similarities of modern design, digital information will be available online and on site-specific iPads provided for further research and exploration.

The installation is meant to ask more questions than it could possibly answer. Why do design objects from the East fit so seamlessly, often invisibly, into a high design mid-century home from the West? Is Cold War design from West and East so different after all? And how has Los Angeles as a place of this cultural collision altered the meaning of these design histories?

Competing Utopias will challenge and broaden our understanding of Cold War design and will compel us to reflect upon an entirely new context for these histories that is the installation itself.

Special events will be presented in conjunction with the installation, including lectures and summer dinner parties with luminaries in architecture, design, film, as well as screenings of ‘rediscovered’ DEFA technical and zoological documentary films from East Germany.

Graphic feature from ‘Art in the GDR’ –  painting by Wolfgang Smy and the sculpture “You must be Armed” by Hans Scheib.