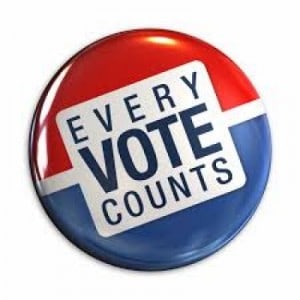 Frances Talbott-White began the proceedings by offering her thoughts. “I love candidate forums. As the leader of the local chapter of the League of Women Voters, we have a policy that no one from Culver City should moderate any of the Culver City forums, because we want to be certain that the moderator doesn’t have any kind of an axe to grind. Owing to my position with the League, I don’t endorse candidates, and I have to say abstaining from endorsements is a pretty liberating thing.” Jumping ahead to the June election, she reminded the audience that Smartvoter.org is the place to go online for all kinds of unbiased, non-partisan voting information, “…like all those judges you have never heard of before you open your ballot.”

Keeping in the spirit of the holiday, moderator Frances opted to have the candidates open with their closing statements, after which each candidates had ten minutes to answer ten questions, or they could spend ten minutes on one question, or any variation of their choosing. While Jeff Cooper, Jim Clarke and Christopher Patrick King (candidate Gary Abrams was absent) had all been given the ten questions to study in advance, Frances upped the ante by including four ‘wild card’ questions that candidates could choose blind to add in to their time.

King was the choice for the opening closing statement, and he offered that the services clubs 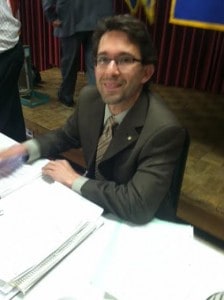 were a point of inspiration for his whole campaign, “…to do the greatest good for the greatest number.” As the sitting president of the Rotary Club, King jokingly noted that this was an occasion when he was not going to ask them to to contribute to a project; he was just asking for their votes.

Cooper cheered the fact of the afternoon being the last candidate forum, and gave his closing as how much he had learned, personally and politically, over his previous four years. “It’s always good to hear what the people have to say, what issues they are really engaged with, but I’m not the guy who can agree with everyone. I can listen to everyone, but I’ll reflect honestly. I don’t want or need to have everyone agree.”

Clarke also stood on the importance of service clubs, telling of his recent success with getting the Exchange Club to partner with the Parks and Rec Dept. to pay for signage in the parks that will promote the anti-bullying policies now being supported in all park activities.

Keeping to the same speaking order, King used his ten minutes to talk about his ‘Culvervision 20/20’ plan, looking to maximize the Expo train station with more art and activity to connect to the downtown area, and the need to update the city’s masterplan. 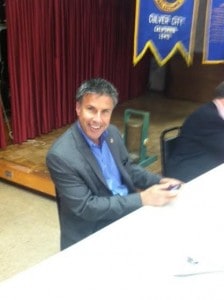 Cooper took the time to outline a number of significant successes the city has had recently, running on a record that would make anyone proud; the successful sale of Culver Studios for $85 million (and the fact that it will remain as a working studio), and the green light for the redevelopment projects such as Parcel B. Citing the studios, Cooper said, “This city was built on art, and we need to keep that in the forefront of all our future plans.”

Clarke opted to answer ten questions in ten minutes, and focused on the problem of water at both ends of the spectrum. The drought and the need for more and better water conservation throughout the city, and the upcoming filtration plant that will be legally required to keep Ballona Creek from being a continuing source of pollution to the Pacific, and the millions that will be Culver City’s share of building and 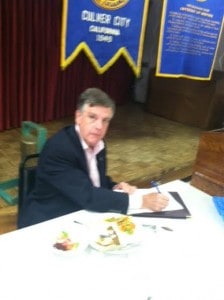 Looking pleased that they had crossed the finish line (or at least the meridian) the candidates all thanked each other for the collegial spirit of the race, and thanked the service clubs for their support.