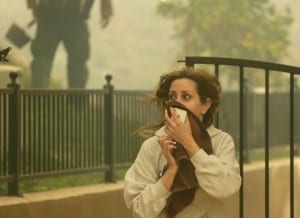 The common wisdom is that we make ourselves promises on Jan 1st and by the 15th, they are only memories and regrets. It’s not enough, this year, to just make a list of self-improvements. It’s time to change the world.

Governor Brown today declared an ‘drought emergency,’ taking a formal position on the fact that we are in the driest season California has seen in a century. It’s easy to feel smug when the rest of the nation is below zero, and we have warm sunshine to bask in, but what we are supposed to be having our wet season. In a year when January is as dry as September, what is September going to look like?

Look Northeast. The Colby Fire is quite probably what will be the first in a series of wildfires; all it takes is couple of idiots with a lighter, and thousands of acres are scorched.

The problem is systemic, and it is time to change the system. It’s no longer about what an individual can do to stop climate shift, it’s about how many individuals it will take to lean on our leaders to change their policies now. The profits of the oil companies cannot be more important than the future of our civilization.

We have, we know, the knowledge and the means to make the needed changes. All we have to do it commit to making it happen.

There is a scene in the film Touch of Evil where Marlene Dietrich, a gypsy fortune teller, reads the palm of Orson Wells with a sad look on her face. “You have no future,” she says, “you used it all up.”