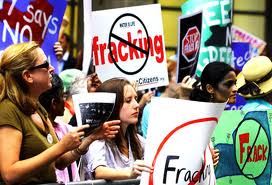 Last week, a coalition called Californians Against Fracking presented a petition with 100,000 signatures to Governor Jerry Brown, asking him to ban fracking in the state. Meanwhile, a bill that would have imposed a moratorium until new regulations were in place was defeated in the state legislature.

Campaigners vow to keep up the pressure on Brown. Two other bills seeking to impose a moratorium, which stalled this year, could come back for consideration in January, according to Peter Aldhous at New Science.

While anti-fracking protests in the north-east states have focused on fears about contamination of water supplies, in California concerns about volatile chemicals released into the atmosphere may come to the fore.

“These areas already have some of the worst air quality in the country,” says Kassie Siegel of the San Francisco branch of the Center for Biological Diversity, which is part of Californians Against Fracking.

California is emerging as the new battleground over the fracking process – in which water, sand and chemical additives are injected into rock formations to release the hydrocarbons trapped within. It is a fight that could become a political lightning rod, as the sites earmarked for development include densely populated urban areas.

So far the US controversy over fracking has been most intense in Pennsylvania, New York and other north-eastern states, where natural gas lies in shale formations in mostly rural areas.