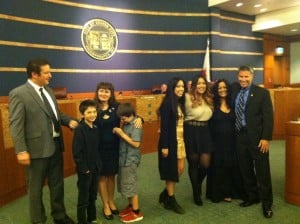 “One person does not run this city,” noted Jeff Cooper in his first speech as Mayor,”and I’m grateful to everyone in the room, and everyone who gets involved with taking care of our city and each other.”

April 22 found the Mike Balkman Chambers full to capacity as the evening’s main event, the mayoral rotation, waited at the end of the agenda. When Jeff Cooper had been named as Mayor and Meghan Sahli-Wells as the Vice Mayor, the crowd offered solid applause.

To begin, two presentations, the first in honor of Earth Day, and the second saluting the 40th anniversary of the Retried Senior Volunteer Project.

Catherine Vargas, the city’s environmental mater deluxe, accepted the proclamation from Sahli-Wells with a smile, saying “Every Day is Earth Day, and we all can keep on doing what we do.”

The volunteers for RSVP,  more than 30 of them, (including our own Sandra Coopersmith)  listened to Mayor Weissman’s  final proclamation as he lauded  the program for “all the needs it meets in Culver City.” With 40 years of volunteer work spanning from the Senior Center to CERT, they earned thunderous applause from the chamber as thanks.

Mary Lavelle was also noted for her work as a volunteer at the VA, which had drawn a letter of praise for those grateful for her efforts. That letter made it all the way up to the President of the United States, and the always energetic but quiet Lavelle met the recognition with a shy smile.

Seventeen comment cards totaled ‘remarks for items not on the agenda’ and mostly focused into three groups; The Coalition for Smoke Free Living, people unhappy with the April 8 council vote on action against gun violence (see letter from Council member Jim Clarke) and a guest from out of town – Doug Shields of Pittsburgh- discussing how to take local political action against fracking. There was also wild enthusiasm from Eric Sims of the DBA in regard to the sweet success of CicLAvia, a gripe for Jose Munoz or the CC Little League on the gopher holes at Bill Botts Field, and a report from the West Vector that they are now (once again) picking up dead crows to screen for West Nile Virus.

Andy Weissman declined the chance to re-cap the year. “I had a luncheon last week, and I said all that. We’ve had a good year, and I’ll be around for another three [as a member of the council].”

The other four council members did take pleasure in the moment to praise Andy for his leadership, his civility, and his skill at governance.

The vote to install Cooper as Mayor and Sahli- Wells as Vice-Mayor was swift and without dissent.

Cooper spoke with sincerity, saying “I’d like to thank everyone who gets involved in our city. We may not always agree – tonight’s a good example – but I appreciate the support from my fellow council members. One person does not run this city.”

He continued “Culver City is at a true crossroads right now.  The past and current councils have done their best… interest of keeping Culver City strong. Our biggest challenge from the State.  In my opinion the State has failed us miserably. It has failed to protect us from [the problems connected to] the country’s largest urban oil field. As mayor I promise to work hard with council staff and community, and  I am proud and humbeld to be the one that will lead us. Thank you so much.”

The traditional “pin ceremony’ took place with Cooper being pinned by his wife Rafia Dadabhoy Cooper and their two daughters, Rhianna and Aly. Meghan Sahli Wells was pinned by her spouse, Karim Sahli and her sons, Lucienne and Etienne.