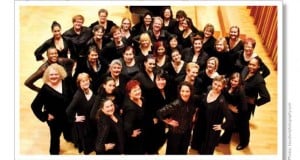 Have you ever heard a choir of women fill a room with such beautifully powerful sound that you were transported ? Vox Femina is honored to present a special performance in their home town of Culver City on March 18 at the Culver City Presbyterian Church at 11269 Washington Blvd. The English and Irish are joined in song as we celebrate the Bard of Avon and St. Patrick’s Day. Join Vox for a bi-cultural performance of classic Shakespeare sonnets and a wee bit of authentic Irish music sung in Gaelic. From classical works to folk songs, celebrate England, Scotland and Ireland’s many traditions, old and new. Vox honors women of different cultures, united in using their own unique voices to help create a world that will hear them!

Editors:
Vox Femina Los Angeles gives women voice through the performance of quality choral literature. Diverse in culture, age, race, belief and sexual identity, we are a chorus committed to commissioning new works and raising awareness about issues that affect us as a family of women. Through music, we aim to create a world that affirms the worth and dignity of every person. Dr. Iris S. Levine founded Vox in 1997. In the past 15 years, Vox has established itself as one of the preeminent women’s choruses in the United States with a demonstrated ability to perform highly eclectic repertoire, some of which can be heard on several recordings. It has actively fulfilled its goals through an exciting schedule of performances, touring and educational outreach. Vox Femina Los Angeles is funded through grants and private donations.

This event is FREE, and made possible in part by a grant from the Culver City Performing Arts Grant Program with support from Sony Pictures Entertainment. (Thanks, Susan! Thank you, Janice !)