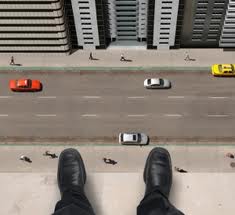 I see you out there on the ledge, contemplating political suicide. Don’t.

It’s been a rough stretch of road, but I kinda figured that you knew it was going to be difficult.  I realized last Tuesday night that you have never been on the other side of such an angry audience before, and I felt I needed to say something to you.

Believe me, I have tremendous compassion for the outrageous position you’ve put yourself in. I did a lot of stupid things when I was your age, (most of them involving high times and lo mein)  but I did not do them as an elected official. If you want this to be your first elected office and not your last, you need to reconsider the stand you are taking, and who you think you are doing this for, and why.

So, even though your face tightens into a rictus of forced politesse every time you see me walk into a room, you should read this and take it to heart.

You are a smart guy. Anyone who has the education that you have has the brains to figure out the situation. You created this situation. By opting to look only at the rules and not at the reality, you are working with theory and not with practice.

What you need to do is look beyond this situation. This is not about unionizing the adjuncts. This is about recognizing who put you in office, and understanding that you work for them. If you don’t do what they think is the right thing, you will be removed.

Those 30-plus people who spoke at the podium during the last school board meeting all vote. They will not wait for the next election cycle, they will get very busy organizing a recall. And, as stated from the podium, a lawsuit.

Your reflections that your childhood experience in these schools gives you the ideal perspective to decide what these schools need falls far short of reality. Your affection for the adjuncts who served in your classroom does not give you the right to take away the ability of non-profit organization to provide other adjuncts for other classrooms. (It pains me that the non-logic in that previous sentence is a reflection of reality- crazy talk, that is.) Your desire to hand over the rights of parents to fund-raise to union officials only ensures that there will be huge fundraisers to end your position and your entire political career.

The people who spoke for hours last Tuesday night are only a small sample of the thousands of angry parents who will be needing your head on a platter if you continue to support the extreme overreach of the ACE union. If you continue on this course, you will assure your place in local history as one of absolute infamy. Any idea of any elected office after this – in Culver City or anywhere else- will be about as likely as a position playing center for the Lakers.

The idea of union protection for these positions is not, of itself, bad. The reality of it is terrible. So, please stop theorizing. Wake up and smell the traffic on the street below you.

If you continue to give merit to this absurd power grab on the part of the union, your future is over yesterday. You are here to serve the people of Culver City, and the parents of the district. You are not here to give the union leaders an easier job. If you would rather serve on a union board, by all means, go ahead. Right now, you are the president of the school board, and you need to start acting like one.

Unless you have some secret longing to be forced out of Culver City, to leave this place far behind and start a fresh new life all on your own, you need to get this off your desk.

You are young. People forget that, because you present yourself as someone who could be a decade or two older than you are. Age does not always confer wisdom, but youth never does. As we say in my profession, you have to stand up and live before you sit down and write. Take this in as a great educational experience, and remember what it is you want in the long run.

So, please listen to the thousands of people who can vote you in or out, and not the dozen people who have talked you out on to this ledge.

You can come back inside. There’s still time.