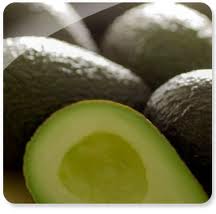 I’ve had avocados on my mind recently.
This weekend I’m getting together with some former Californians who’ve moved to the rural mid-West. Last weekend they were busy pulling up the frost-bitten tomato plants from their backyard garden, while I was busy harvesting tomatoes from a Santa Monica garden which is still going strong.

I set some a-few-days-away-from-being-perfectly-ripe tomatoes out on the counter, along with some moderately firm Culver City farmers market avocados Yes, I’m planning to remind the California ex-pats of the sensual culinary pleasures they left behind: guacamole with a freshness and flavor which will knock their mid-Western socks off.
I’m sure most of us already have our favorite guacamole recipes. But how many of us have taken avocados to the next level with salad and salsa? We’ve all had tossed green salads with luscious, creamy bits of avocado. I’m not talking about those salads, wonderful as they are. I’m talking about salads where avocado is the “above-the-line” star and the other ingredients are in the “also featuring” category. I remember luncheons with rich but oh so decadent stuffed avocado halves filled with chicken or shrimp salad. Very posh and adventurous back in the day. But I’m not talking about those retro “ladies who lunch” entrees. I’m talking Mesoamerican. Real American roots food. Maize and tomatoes and avocados and chiles. Aguacates rellenos. Salsas packing healthy carbs, fats and nutrition.
Troth Wells’ Global Vegetarian Cooking, along with my research for last week’s succotash recipes, opened my eyes to the possibilities of avocado and corn. The combination may strike you as rather rich for an entree, but it’s a good sort of rich: good tasting and good for you. If you’re in the mood for a lighter entree, go for the salsa. My mouth is watering at the thought of grilled fish or chicken with a corn, avocado and tomato salsa.
Avocados have one of the highest fat contents of commonly eaten produce: around 80-85 percent of their calories come from fat. But avocados are an incredibly healthy food choice, largely due to their fat content. Most of the fat in avocados comes from its phytosterols. Several of these phytosterols provide support for the body’s system of keeping inflammation under control. Additionally, avocados contain polyhydroxilated fatty alcohols (PFAs). PFAs also help our bodies fight inflammation. Finally, avocados contain oleic acid, a monounsaturated fatty acid which helps lower our risk of heart disease and increases our absorption of carotenoids. They are a good source of potassium, B vitamins, vitamin E and vitamin K. Their smooth, silky texture belies the amount of fiber they pack. The high fiber content means that their carbohydrates are digested more slowly, which results in a more gradual rise in blood sugar levels. With a glycemic index rating of 2.39, they fall between cooked cabbage (2.16) and zucchini (2.53) on the list of low glycemic foods. In comparison, a baked potato as a gylcemic index value of 85; white bread, 70; and sweet corn, 65.

Wells’ recipe for stuffed avocados takes just minutes to make. His recipe is geared for those who like just a touch of spice. You could turn up the heat a bit by substituting finely minced hot pepper for the chili powder But be judicious in your seasoning so you don’t overwhelm the sweetness of fresh corn and tomato.

Cut avocados in half. Remove pits. Drizzle a little lime or lemon juice over the halves so they won’t brown. If you’ve not already done so, cook the corn briefly in boiling water or microwave, approximately 2 minutes. Drain. Set aside to cool. Chop the green pepper and tomatoes. Mix corn, green pepper and tomato in medium-sized bowl. Mince jalapeno or hot pepper, if using. Put chili powder or minced pepper, remaining lime or lemon juice, vegetable oil, salt and pepper. Whisk together briskly. Taste. Adjust; adding more oil or seasonings if necessary. Pour dressing over vegetables and stir well. Spoon vegetables into avocado halves. Serve at room temperature. The vegetable mixture can be prepared ahead of time, but wait until you are just about to serve it before adding dressing and cutting the avocados.

When it comes to corn and avocado salsa, some people like it raw and others like it roasted. The corn, that is. Some people serve it as salsa, others as salad. I’ve adopted a raw corn recipe from the Pioneer Woman blog, and a roasted corn recipe from Daddybones.com.

Corn, Avocado, and Cilantro Salad/Salsa
(serves 8 as side salad)

Shuck corn. Rinse ears, then slice kernels off them holding the ear upright and running a sharp knife down along the sides. Combine the kernels, diced avocados, onion, jalapeno, hot pepper and cilantro. Mix lime juice and vinegar together with salt and pepper. (Pioneer Girl’s recipe also included a teaspoon of sugar, but I think the corn is fine without added sugar.) Drizzle dressing over salad, toss to mix thoroughly, and chill for an hour or more before serving.

Roasted Corn , Tomato and Avocado Salsa
(12 servings)
6 ears of corn, shucked
1 tablespoon corn oil
1 jalapeño (or 1/2 habenero), stemmed, seeded, and minced
4 or 5 scallions, whites and greens, chopped diagonally into 2 inch pieces
2 T corn oil
4 medium tomatoes, seeded, juices reserved for other use, cut in half across the diameter, and then cut into wedges
2 or 3 avocados, approximately 1 – 1/2  lb. total, halved, pits removed, cut into pieces about the same size as the tomato wedges, drizzled with lime juice to prevent browning
Salt and freshly ground black pepper to taste
Fresh chopped fresh cilantro leaves for garnish
Lime wedges, optional.
While you could use roasted corn from the grill for this recipe, you can also roast the corn kernels in a skillet on your stove. And, if you’re really in a time-saving mood, you could buy freshly roasted corn at the Tuesday afternoon Culver City Farmers Market and use it in this recipe.
These instructions, adopted from Daddybones’ site, assume that you’ll be roasting the corn in a skillet.
First, stand a shucked ear of corn in a shallow bowl, stem-side down. With a knife, slice kernels off from top to bottom until all are removed. Continue with every ear. Put a large skillet over high heat. Add the corn oil. Once the oil is hot, add the corn kernels and chilies. As the corn cooks, shake pan to distribute it so that each kernel is deeply browned on at least one surface. While the corn is still in skillet, but with the heat off, stir in scallions and let sit for a minute, stirring occasionally. Remove to a bowl.. Wipe skillet with a paper towel, add oil and turn heat to high. When oil is almost smoking, add tomatoes. Cook, undisturbed, until they are nicely browned and slightly softened, about 2 minutes. Turn, sprinkle with sugar and cook for another 2 minutes. Remove from heat. Add tomatoes to roasted corn, and let cool to room temperature. Add diced avocados and seasonings. Taste, and adjust seasonings if necessary.
The Culver City Farmers Market is held on Tuesdays from 2 to 7 pm on Main Street in between Venice and Culver Blvds. The Culver South Farmers Market is held on Saturdays from 7:30 a.m. to 1 p.m. In the Westfield Culver City parking lot at the corner of Slauson and Hannum.
Katie Malich is glad that she lives in Southern California, home to 95 percent of the United States’ avocado production. The tremendously popular Haas variety was propagated from a single tree of unknown origin and patented by La Habra Height mail carrier Robert Haas in 1935. The large, round Reed variety with its slightly nutty flavor originated from a chance seedling discovered by Californian James S. Reed in 1948. And Bacon avocados, it turns out, are not named after the breakfast meat, but after farmer James Bacon, who developed them in 1954.