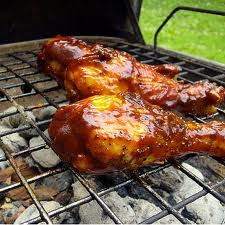 Summertime, and the grilling is easy.

The Fourth of July weekend is just around the corner. Three days to relax, catch up with friends and family, and celebrate our nation’s independence. Locally, the holiday weekend culminates with the annual Fourth of July fireworks celebration at Culver City High School..

This weekend, join the cooks, hosts and hostesses declaring their own independence from hot kitchen cooking with ovens and stoves. Whether you have a small Hitachi on an apartment balcony, a fully loaded gas grill next to your back deck or a classic country smoker outside your garage, the Fourth practically calls out for outdoor cooking and dining.

Too hot or too busy to cook? No problem. You can pick up some tasty ‘cue at both the Tuesday afternoon and Saturday morning Culver City farmers markets. There’s scrupulous down-home cobbler at the Tuesday market, and to-die-for baked goods for sale at both the Tuesday and Saturday markets. Grab some hummus and pita chips, salad fixings, a loaf of artisan bread and cheese, and some refreshing fruit juices from market merchants to round out your meal. You’re good to go.

Speaking of fruit, I’ve got to give a special shout out to Berkhart Farms at the Tuesday market. I bought three containers of their organic blackberries last week. They looked promising. Each container was full of perfectly ripe and juicy beauties. No slightly immature berries still sporting a reddish hue. No slightly overripe berries bruised in transit and leaking juices into the bottom of the basket. So far, so good. I expected some nice fruit. But I’ve got some pretty high standards. After all, summers during my teen years were spent in Northern California where massive blackberry bushes grew abundantly in sunny areas along rural roadsides. Afternoons of berry-picking ended up with a scratch (or three or four) despite our heavy long-sleeved shirts and denim jeans. But the occasional scratch was a small price to pay for the blissful berry nirvana of blackberries picked at the peak of ripeness. I hadn’t thought it possible to achieve this pinnacle of perfection from commercially harvested berries, but the Burkart ones were perfect. Just perfect. Each bite I took sent me further into fresh berry bliss. Life, liberty and the pursuit of berry bliss. Sounds good to me.

When it comes to grilling in Southern California, though, it’s clear we’ve declared our independence from one-main-dish for all. At any large family or holiday gathering, you’ll find freedom of culinary expression. On one side of the grill, you’ll find sizzling meat basted with barbeque sauce. On the other side of the grill, you’ll find sliced eggplant and zucchini and portabella mushrooms. Hamburgers, salmon burgers, veggie burgers – even tofu dogs along with Nathan’s famous all-beef hotdogs.

Here are a few recipes for marinades, dry-rubs and barbeque sauce. You’ll want to follow specific instructions for each type of meat, fowl, fish or vegetable you’re serving. But, in general, if you’re using a dry-rub, your first step is applying the spices – literally “rubbing” them into the meat. And with the vinaigrette marinade, the meat or vegetables are left soaking, refrigerated, for an hour or more before hitting the grill. In contrast, the barbeque sauces are lovingly applied to the items on the grill around 15 minutes before they’re finished cooking. They are then basted as needed until they’re ready to serve.

The addition of tomato sauce to this recipe adds a note of sweetness while the long simmer blends the flavors together perfectly. Bring all ingredients to a boil in a large non-reactive stock pot. Reduce heat. Cook slowly, stirring occasionally, until fairly thick. Will keep refrigerated for a while. For longer storage, freeze portions; defrost and reheat as needed. (Adopted from Best of the Best from Louisiana.)

This sauce, adopted from the Morgan family recipe in a Columbus, Georgia, Junior League collection, contains no peaches but it does carry a little more kick than the Louisiana recipe above. Red and black pepper and prepared mustard are the secret ingredients.

Mix all the ingredients together in a large non-reactive stock pot. Bring to a boil and cook, stirring occasionally, for about 5 minutes. The contributor, Mrs. Morgan, claims that it will keep in the refrigerator for months without spoiling, but the 1979 recipe has not been tested under current USDA food preservation standards. To be on the safe side, I’d freeze any leftovers as a precaution.

Use this vinaigrette marinade for grilling fresh vegetables. It helps to keep them from sticking to the grill, and enhances their taste.

Combine ingredients in a large bowl. Add prepared vegetables, tossing them to coat. Cover and refrigerated for one hour or longer before grilling.

This vinaigrette marinade lends itself well to variations. You can use this rough outline to create a marinade which will suit the vegetables you are grilling. Try substituting fresh Meyer lemon juice or white wine for the vinegar. Add a couple of teaspoons of herbs (parsley, tarragon, thyme, perhaps, or maybe crumbled rosemary or bay leaf.). Substitute minced shallots or onions for the Dijon-style mustard.

Every fan of southern barbeque has his or her own special dry rub recipe. The 1997 edition of Joy of Cooking provided the inspiration for this recipe. I’ve added a touch of onion and garlic powder. But if you’re lucky, you might be able to talk someone into sharing their family’s secret blend. To change things up a little, you could substitute rubbed dry thyme for the ground mace. The thyme will give a slightly lighter flavor to the rub.

As an aside, I’ve skipped the preliminary toasting and grinding of cumin seeds which the Joy of Cooking calls for. I use a lot of cumin, so the ground cumin in my spice cabinet is fresh and I’m generally too impatient to use a mortar and pestle unless it’s absolutely necessary. But if you have the time, equipment and patience, go for it. Roast the cumin seeds in a skillet over a medium flame for about two to three minutes, then remove from heat and grind.

Stir ingredients together well. Cover. A clean mason jar is perfect. Store in a cool, dark, dry place. It will keep up to six weeks.

The Culver City Farmers Markets are held on Tuesdays and Saturdays. The downtown market is held each Tuesday from 2 to 7 pm on Main Street between Venice and Culver Blvds. The Culver South market is held on Saturdays from 7:30 a.m. to 1 pm in the northeast corner of the Westfield Culver City parking lot at the corner of Slauson and Hannum Blvds.

Katie Malich enjoys her barbequed chicken all three ways: dry rub, marinade, and barbeque sauce – although not at the same meal.

The peach is the state fruit of Georgia, but those Georgia peaches have nothing on the fresh peaches available at the Tuesday Culver City Farmers Market. California produces 65% of the fruit crop in our …[READ MORE]

What is white or green or purple or orange; full of vitamin C, dietary fiber and folate; and only 25 calories per 3.5 ounce serving? Don’t let this rainbow of color stump you. The answer …[READ MORE]