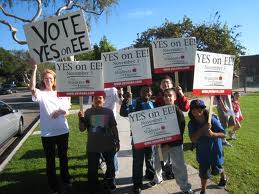 What is the story with Measure EE, that parcel tax that we passed to help with funding the schools ? How many seniors opted out ? At the Culver City School Board Meeting on May 24, Crystal Alexander of the Measure EE Oversight Committee read this statement-

“Proposition EE, the school parcel tax, was passed by the voters of Culver City on November 3, 2009. It provides that all property owners within the Culver City Unified School District (CCUSD) boundaries are assessed $96 per parcel per year for 5 years.

The new tax went into effect in July 2010 and Culver City property owners were assessed the tax on their 2010 tax bills.

As stated in the ballot measure put before voters, the parcel tax funds were to be used to protect the quality of education in Culver City schools. The measure provides that the funds must be used to maintain math, science, technology, music and art programs, retain teachers and maintain school libraries.

A professional auditing firm has been hired by the school board and will issue an audit on the use of the funds at the end of 2011. However, the Oversight Committee has carefully examined the current district budget and we can report that the funds received to date have been properly applied to math, science, art and music programs and school libraries. Specifically, the funds have been used to help pay the salaries of math and science teachers, music and art teachers and two library clerks. Without the Proposition EE funds, the district would have had to make additional cuts in these areas.

It is important to point out that our committee has confirmed that the Proposition EE funds have not been used for any capital improvement projects or administrative salaries.

The funds from the parcel tax are just one of many sources of the CCUSD’s annual budget of $50 million. A major portion of the CCUSD budget comes from the State of California, which has experienced severe budget reductions. In comparison, the parcel tax is a unique and valuable source of funding because it is relatively stable and it comes from and stays in Culver City.

Adopted by the Citizens Oversight Committee on May 4, 2011.”

Afterwords, Roberta Sargent came to the podium to ask how many seniors had chosen to opt out. School Board President Scott Zeidman offered that he did not know, but “the average opt out rate for parcel taxes was about 10%.” District Assistant Superintendent of Financial Services Ali Delawalla reported that there were 910 exemptions. Sargent asked how many could have opted out, and George Laase offered from the audience that the number was 13,000. Zeidman quickly noted that was about 8%, even less that the average.

The money is coming in, and while EE funding will not even come close to filling in the budget gap inflicted on the district by Sacramento, it’s another reminder that local support for the schools is community wide.

Not unexpected, but distressing nevertheless; with 10, 485 registered voters, only 2,514 of them bothered to show up and vote. The turnout was very low, but the close results show that some voters were paying …[READ MORE]

If you live in Culver City, the ONLY thing on your March 8 ballot is four contests for seats on the LACCD Board of Trustees, all elected at large throughout the massive L.A. Community College …[READ MORE]

Proposition 21 seeks to raise money for California’s state park system by adding an $18 surcharge to the license fee for each private automobile in the state. Day-use charges at any and all of California’s …[READ MORE]