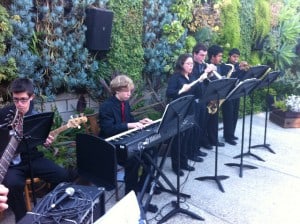 The Culver City High School Academy of Visual and Performing Arts will present our annual Spring Music Concert on Thursday, May 26 at the Robert Frost at 6:30 p.m. Parents, students, and the entire Culver City community are welcome to come and enjoy an evening of great music.

The concert will feature the Culver City High School Concert Band, as well as the AVPA Chamber Singers, String Ensemble, Percussion Ensemble, and Jazz Combos. The Concert Band, Chamber Singers, and Jazz Combos will also be performing at the Music in the Parks Music Festival on Saturday, May 21, and will present their festival pieces on the spring concert.

The Jazz Combos have also been performing throughout the year. Two combos recently performed at the Culver City Education Foundation’s Tribute to the Stars at Sony Pictures Studios. One of the other four combos performed at a private wedding last month, which also featured members of the Culver City HS Marching Band.

The AVPA music ensembles will also be featured at the AVPA annual Java Gala on June 3 at the Kirk Douglas Theatre, a benefit production for AVPA sponsored by the AVPA Foundation.

Please note the earlier start time of 6:30pm. Admission to the Spring Concert is a requested donation of $5, but no one will be turned away. Please come out and support our outstanding student musicians and celebrate the finale for our seniors as they prepare to graduate.

The Academy of Visual and Performing Art’s Young Filmmakers will premier three new films, “Snail Mail,” “Agua Dulce” and “Let Me Be Found” at Sony Pictures Studios on Friday, June 10. The premier is free …[READ MORE]

For the second straight year, AVPA Theatre has been awarded first place for the Los Angeles County region in the CETA (California Educational Theatre Association) competition. This year, again under the direction of Creative Director …[READ MORE]