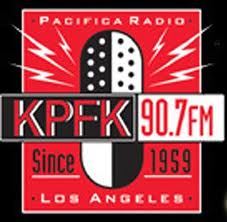 Ben Cameron, from KPFK Pacifica Radio, came to see AVPA Theater’s production of The Laramie Project in mid-November. After the show, there was a cast “talk back,” at which time he conducted interviews and welcomed discussion. He later edited the piece and it was broadcast on December 6. In his introduction, Cameron said he was “not just surprised, but enthralled” with the production; that it was “professional, moving, emotional, and honest… everything one might hope to see in a night of theater.”

In attendance that night was CCHS teacher Carlos Valverde, who had brought some of his students to the performance. He talked about his years of experience working with others at CCHS to create an atmosphere of tolerance and acceptance. Valverde noted the courage of director Sheila Silver in choosing and directing this particular play and the maturity of the cast members in dealing with the show’s sensitive subject matter. Both Valverde and Silver spoke of joy and pride in our student and teacher community for the positive response to the show, and Silver expressed her great appreciation for the remarkable support it had received.

Student cast members answered Cameron’s questions articulately and honestly, with thoughtful answers about civil rights issues as they described the play as “powerful” and “relevant today”. They also shared personal observations of their high school environment.. The general sentiment was that they were proud to say that CCHS is, for the most part, accepting of its diverse population; however, there is still work to be done and the power of hurtful words should not be underestimated.

Cameron closed with remarks about how impressed he had been with the students and found them to be sympathetic, understanding, and smart. “If there was ever proof that the world is changing for the better,” he said, “it’s hearing high school students speak with such eloquence and honesty about tolerance and acceptance… things will continue to get better as long as brave people like Carlos Valverde, Sheila Silver, and those parents at the Culver City AVPA continue to bravely teach their children what is right, not just what is accepted…. and if they continue to encourage our young artists to make art that challenges society to look at itself and change the way we think.”

Senior Seminar Shines at the Willows

The theater building for the Willows Community School was filled on Sunday afternoon, June 12. The audience in the darkened house was intensely involved with the actors onstage. What most of them knew was that …[READ MORE]

For the second straight year, AVPA Theatre has been awarded first place for the Los Angeles County region in the CETA (California Educational Theatre Association) competition. This year, again under the direction of Creative Director …[READ MORE]