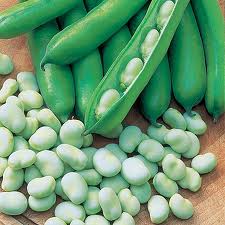 Fresh fava beans are in season at the Tuesday Culver City Farmers market.
The tender fresh beans have a naturally creamy, buttery taste, slightly nutty with a slight hint of bitterness.

Does the word “fava” leave you scratching your head in puzzlement? You might be more familiar with them under their British name, broad beans. I ‘m not certain how or why the British began to refer to them as broad beans. Perhaps it was to distinguish the larger culinary variety from the smaller horse or field beans used primarily for animal feed. Perhaps it was just a literal translation of the Italian word for broad: “fava”.

Fava beans are one of those labor-intensive spring vegetables, like English peas. Both require shelling. But with favas, shelling is only the first step. The beans are encased in a protective covering which must be removed before the tender beans can be enjoyed. The most efficient way of doing that is to blanch and shock them. Put the shelled beans in hot water and cook them for a minute or two. Then remove them to an ice cold bath (some people plunge them into ice water, others use a literal ice bath). The hard casings will be softened and easier to remove. Pinch off one end and push the fava out of its casing. It should pop out easily.

Whether because of the extra work they entail, or some other reason, fava beans have been slow to come into the mainstream of American cuisine, but they have been long prized in Middle Eastern, Italian, Greek, Ethiopian and Egyptian communities.

Favas were the only bean cultivated in the Old World until explorers brought New World legumes to Europe. In fact, fava beans were cultivated as early as 6000 BC, perhaps earlier. They are an important part of the Middle Eastern, Mediterranean and North African diet, and are found in South Asian and South American cuisine as well. A rich source of protein, they are eaten year round in their dried form, and prized in spring when young, tender beans are available.

Fava beans are not for everyone. Sadly, those with a certain hereditary condition (glucose-6-phosphate dehydrogenase deficiency) , may be affected by certain compounds in the fava and develop a potentially fatal condition called “favism.” Favas also should be avoided by those taking monoamine oxidase (MAO) inhibitors because they are rich in tyramine. But these conditions have not stopped fava beans from becoming an important culinary staple.

Ful medames has been called the national dish of Egypt. Dried fava beans are soaked and cooked overnight with spices under slow heat. Sometimes red lentils are added for color. They are served, most often mashed, with olive oil, chopped parsley, garlic, and lemon juice, accompanied by pita bread. Add some fried or hard boiled eggs and you’ll have a common breakfast meal.
May 1 is a national holiday (Labor Day) in Italy. In Rome, it is traditional for families to picnic in the countryside on fresh fava beans and Pecorino Romano (a hard sheep cheese).

In the spirit of the Roman picnics in the Campagna, here are some fresh fava bean recipes.

Shell, blanch, shock and re-shell the favas. (See above for directions.) In a medium bowl, combine the minced shallot, balsamic vinegar, salt, and pepper. Let sit 10 minutes, so flavors blend, then slowly whisk in the olive oil. Toss with fava beans, cover, and chill for at least 1 hour and up to overnight. Before serving, drain (or use a slotted spoon to serve). Add minced chives if desired. You can either mix them in before serving, or use as a garnish. These marinated fava beans are a perfect addition to an antipasto plate. Alternatively, you can serve them as a salad by arranging some lettuce leaves on salad plates and topping each plate with some of the marinated favas. The reserved marinade can be served on the side as dressing. (Adopted from Seasonalchef.com)

Heat olive oil in a medium saucepan, then add garlic and saute until light brown. Stir in oregano. Add 1 cup of stock. Bring to a boil, season to taste with salt and pepper, and add 1-1/2 cups of the fava beans. Simmer for a few minutes. Once the flavors have blended, scrape into a blender and puree with the remaining 1/2 cup stock until smooth. Return sauce to pan, then add the remaining 1/2 cup favas. Simmer gently. Taste and adjust seasoning, if necessary. Meanwhile, cook the pasta al dente. Drain, reserving about 1/2 cup of the cooking water. Pour the pasta into serving bowl. Add the sauce and toss well, Thin with the pasta water, if necessary. Serve immediately, with freshly grated cheese as desired. (Adopted from Michael Chirallo’s Tra Vigne Cookbook.)

Katie Malich wishes she could celebrate May 1 with a picnic in the Roman Campagna, but is considering a fava bean picnic by the Pacific as a consolation prize.

Last week, in honor of the Asian New Year, I loaded up an entire cloth shopping bag with fresh oriental vegetables. My first stop was the Muoa family stand at the north-west corner of Main …[READ MORE]

Sugar snap peas have become an ubiquitous – and delicious – addition to vegetable platters. Plumper than a snow pea, with a soft, edible shell unlike their cousin the English pea, it seems like they …[READ MORE]

You have no idea how thankful I am to see blue sky outside my window this morning. On Sunday I was beginning to think that there was a cosmic misunderstanding about the concept of “spring.” …[READ MORE]