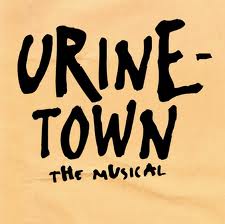 At the final dress rehearsal, it was clear that things were ready. The set was a total mess, the lighting showed every spray painted splotch of graffiti, and the the costumes on the actors were a collection of thrift store cast offs and dirty laundry. Perfect.

“Urinetown – The Musical” relies at least as much on it’s status as a a traditional American song- and- dance- and -love story as it does on it’s urological/political plot points. Corporate greed has locked the bathroom door, and citizens must pay to pee. The poorest are, of course, S.O.O.L. and an old man is taken away by the police for relieving himself against a wall (after begging his own son,  a corporate employee for some help.) This begins the action, and as corporate drones face off against beggars, the singing and dancing gift the ideas plenty of lift. There’s enough campy satire to keep it light, and plenty of big ideas to give it depth.

To answer the question that is already being asked- Is this a show for kids? The answer is yes; depending on the kids. I brought mine, and while the 7 year old was utterly grossed out by the romance and kissing, the 10 year old shrank into her seat at the sight of the dead people and the corporate zombies. But they both thought the music was great, and the dancers were exceptionally good. Sally, a little girl who serves as one of the narrators, put it all into a frame they could absolutely understand. Everyone needs to pee.

Director Sheila Silver has kept true to the spirit of the satire, adding in small nods to half a dozen musicals- You will no doubt catch the homage to the “The Sound of Music,” but pay attention and you can have the revolution from “Les Miz” and even Tony and Maria’s romantic pas de deux from “West Side Story.”

The actors keep telling us this is a musical, breaking the fourth wall often enough to keep us from getting really scared or grossed out by what’s going on onstage. The cast is, as ever, fantastic. AVPA has a company that any professional theater would be proud of, and their work as an ensemble continues to mature and strengthen.

It’s only one weekend, so get to the Frost and get in line tonight. Oh, and you might want to bring some extra cash to use the bathroom; there’s no guarantee that these things are free.