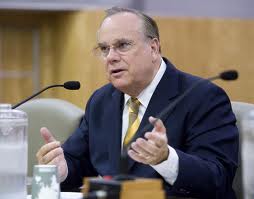 The Culver City Chamber of Commerce March Luncheon is planned for Thursday, March 3 with State Treasurer Bill Lockyer as the guest speaker. Join us at the Radisson Hotel, 6161 Centinela Ave. at noon.

Bill Lockyer is the State’s banker. It’s a bank that processes trillions of dollars in transactions every year. He sells California’s bonds, invests its money and manages its cash. And he handles those duties while sitting on the governing boards of the nation’s two largest public pension funds – the California Public Employees’ Retirement System and the California State Teachers’ Retirement System. It’s a big job.

Lockyer’s public service career has spanned more than three decades. From 1999-2006, he was California’s Attorney General. Before that, he served 25 years in the State Legislature and culminated his Capitol career as Senate President pro Tempore.

Join the Culver City Chamber of Commerce for our Holiday Mixer on Wednesday, December 8 to network with fellow Chamber members and meet new perspectives at Room&Board, a 36,000 sq. ft showroom in the Helms …[READ MORE]

The Culver City Chamber of Commerce was honored at their annual California Legislative Summit in Sacramento on this past May 17 and 18. The Summit is an annual event where business issues and government meet …[READ MORE]