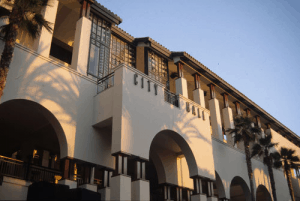 The final performance in the 1988 series will be on Saturday, September 9, 2017 at Culver City City Hall Courtyard, with two evening showings at 5PM and 7PM. This dance performance by Heidi Duckler Dance Theatre will highlight Hanging Garden, Quotation Courtyard & Panoramic and La Ballona public artworks located at Culver City City Hall. The performance is free for Culver City residents and $25 for non-residents.
This culminating performance is deeply rooted in the history of Culver City, and coincides with the actual month of the City’s Centennial. This one-hour performance begins with a processional parade down Culver Boulevard and ends in Heritage Park (western most section of the City Hall Courtyard area) where a replica of the former City Hall building façade is located.

The audience will be seated in the main courtyard area as their attention is drawn upwards to the five dancers performing on the second and third balconies of the City Hall atrium where Hanging Garden by Ed Carpenter in sited. Made from hand blown leaded glass, Hanging Garden, is an abstract representation of a hanging garden and serves as a wind barrier and light filter bridging the upper floors of Culver City City Hall. This performance is accompanied by live chamber music reflecting a classical response to the architecture of City Hall and the history of Culver City. The second act occurs in Heritage Park where La Ballona by May Sun and Quotation Courtyard & Panoramic by Barbara McCarren are sited. La Ballona is a commemorative piece highlighting the history and importance of Ballona Creek and the indigenous people of the area, sited in the formal pools. Quotation Courtyard & Panoramic fuses the past with its present, using bricks from the former City Hall and quotes from historical and Civil Rights leaders. The dancers in the second part of the performance beckon the audience to a new landscape, engaging them in intimate dialogues about May Sun’s artwork and our human origins.
1988 features four site-specific dance performances by Heidi Duckler Dance Theatre, centering on six featured artworks from Culver City’s public art collection. The 1988 event series celebrates the 1988 adoption of the Art in Public Places Program Ordinance and will highlight the public art and performing arts grant program as primary components of the ordinance.

Because the Heidi Duckler Dance Theatre performs outside of proscenium stage settings, they find frequent opportunities to engage the community while they are in residence. Rehearsals are open to the public, which provide opportunities for community members to experience the choreographic process. Tuesday, August 29 from 6-10PM; Thursday, August 31 from 6-10PM; Tuesday, September 5 from 8:30-11:30AM; Wednesday, September 6 from 4-8PM; Thursday, September 7 from 4-9PM; Friday, September 8 from 4-9PM. Please note rehearsal hours and dates are subject to change.
COST: Admission is free to Culver City residents with a code, RSVP required (limited space). $25 per ticket for non-residents
CODE: CCResident
TICKETS: To reserve a ticket, visit http://tinyurl.com/y8lbywu8 or search “The ‘1988’ Series: ‘Hanging Garden, Quotation Courtyard & Panoramic and La Ballona’ on www.eventbrite.com
This performance series is made possible with major funding from the City of Culver City Cultural Trust Fund. Additional sponsorship made possible by The Culver Studios, The Lapis Press and The Culver Hotel.