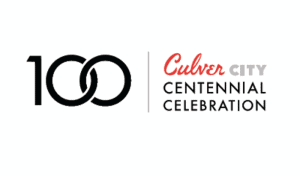 On Sept 20, 1917, Harry Hazel Culver’s dream city became a reality in the incorporated City of Culver City, consisting of a smattering of buildings, a train and a road or two in the flatlands between Los Angeles and Venice. Culver knew the new city needed businesses to attract customers and employ citizens, so he ballyhooed that “All roads lead to Culver City” for marathons, free bus rides to family picnics and land ripe for development. When he spotted Thomas Ince filming along Ballona Creek, he convinced the budding filmmaker to move his studios from Pacific Palisades to his new city.
On Sept 20, 2017, Culver City citizens will celebrate the founder and his dream of a city of progress for one hour at a Commemorative Centennial in City Hall. Attendees will visit see displays of historic and future Culver City in visions of Parcel B, Ivy Station and Market Hill from noon to 1 p.m.
The committee that has guided the year-long celebration of 100 years of progress wound up its final meeting this week with details on the closing celebrations. In addition to the commemorative anniversary, there will be a party in the park on Sept. 16 in Veteran’s Park from 11 a.m. to 7 p.m., reminiscent of the opening party a year ago, and the La Ballona Festival held one week before.
Clarke said it will be a day-long romp in Veterans’ Park with food trucks, entertainment, fun for kids, bands and dancing at a beer garden for adults and a really big birthday cake.
“It’s a day for families to celebrate together,” Clarke said. “There will be four bands, so music all day with name bands for the beer gardens.”
Post park party, on Sept. 23, there will be reprise of last year’s Sony gala attended by selected invitees with a gala closing masquerade ball, “The Party of the Century,” at the Culver Hotel attended by 250 sponsors and invited supporters of the Celebrations.
Nothing emphasized the fact that the founders had no more idea of what the next 100 years would bring than Marcus Tiggs and his Time Capsule.
“Make sure they won’t have trouble reading it in 100 years,” said City Historian Julie Lugo Cerra. One hundred years ago there were no smart phones – intercontinental telephone service had just been established – no Internet, no Facebook, email or Tweets. Books and libraries replaced by Google searches. Cursive writing, praised in its elegance, no longer taught, but surplanted by tweets typed on a touch screen.
“We have had many suggestions on what to include, now it’s time to gather the items together,” Riggs told the committee. The capsule is medium size, to accommodate flags and such, but attention must be paid to assembling the contents, including unpacking directions for those who will open it in a number of years still to be determined.
“Organize the contents,” Cerra said, “so it can be unpacked without damage.” Storage – in either a buried vault or above ground – could be affected by shifting in earthquake-prone California.
There has been some discussion of a lasting legacy to be left by the committee for the citizens of the city. Suggested by Cerra, on the Advisory Board for the committee, the question is in knowing how much will be left from the funds raised and spent by the committee for the Galas, supplies, opening and closing ceremonies and events during the year. Their original budget of $150,000 was passed early last year. Fundraising continues, Clarke said.
One of the most popular events, the historic Screenland 5k run through Culver City in February, was not an official event put on by the committee, but rather by committee member Mike Cohen. It paid back its cost and there are projections for another in 2018.
The banners of artwork created by local school children that have graced the city’s street lights this historic year will be taken down and restored. Parents of the artists will be offered a banner gratis while others will be sold for $25 at the La Ballona Festival.