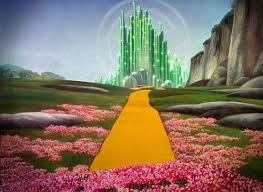 Culver City Public Theatre is proud to announce its 19th season of free theatre in Carlson Park, celebrating the Culver City Centennial. Our Children’s Popcorn Theatre presentation is “To Oz and Back”, a collection of short plays written by Daniel L. Hurewitz, Christopher Gough, Morna M. Martell and Jen Huszcza, and directed by Eve Weston. All revolve around characters from MGM’s beloved classic, “The Wizard of Oz”, based on the book by L. Frank Baum. The movie was filmed in 1939, just a block away from Carlson Park at MGM, now Sony Pictures Studios. The plays imagine what might have happened before, after and behind the scenes.

Performances are at noon on Saturdays and Sundays from July 15th to August 20th.

All performances are free.

In a nod to Culver City’s early motion picture roots, this season’s mainstage show is a comedic adaptation of Shakespeare’s classic “Romeo and Juliet”, titled “Romeo and Juliet in Screenland”, brilliantly written by Nakisa Aschtiani and directed by Karyn Morton. The time is 1917 in Culver City, where two rival movie studios, Montague and Capulet, are vying to make the next great picture. Montague’s dramatic star, Romeo, wants to make a comedy and by chance he meets Capulet’s star Juliet. True to Shakespeare, schemes are devised, but this version definitely does not end in tragedy!
Performances are at 2 pm on Saturdays and Sundays from July 15th to August 20th.

Bring a blanket or a chair and enjoy free theatre in lovely Carlson Park, 10400 Braddock Drive, at the intersection with Motor Avenue. Parking is free, but to respect neighbors, attendees are asked to park on the park side of the street only.
For more information, go to www.ccpt.org or email [email protected]