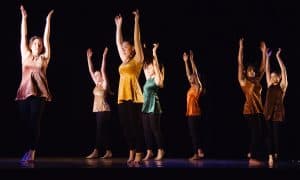 The Academy of Visual and Performing Arts ‘Danger Zone’ Dance company presented their Spring Concert over this past weekend, taking the stage at the Vets Auditorium with rhythm, sound and color that showed off some great choreography and powerful talent.

With 22 separate numbers, the all girl troupe kicked iff with an explanation that the faculty had wanted a show using the music of the Beatles, but the dancers, not so  much. “So,” Leah Thomas offered brightly with co-president Kari Kishi, “we compromised.”  The Beatles music appeared and reappeared through the show, but seemingly without much thread or connection to anything else. The short pieces were wildly eclectic, and never less than engaging, but the show felt like an assortment rather than a collection.

Very strong choreography and powerful solos punctuated the performances, with the whole crew giving their all in piece after piece. Not only were the students in top form, but Director Louis Chavez left his distinct style on much of the concert with Afro-Carribbean moves, balletic glides and big Broadway-style bounce. Very articulate work by Becca Cousineau and Laela Bell, using the group dynamic to evoke multiple expressions and open the dance to bigger feeling.

The whole company can put their feet up and rest in the knowledge of good technique and continual creative growth.