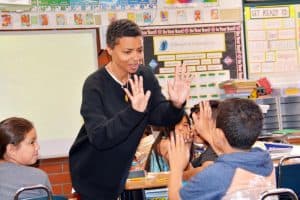 It’s not easy being a kid in today’s world. There’s the constant battle to fit in with your classmates, the difficulty understanding how to deal with ethnic, socio-economic and other differences, and even the challenge of facing your own fears.

But yesterday at La Ballona Elementary School, students found out one very important lesson – they are not alone.

Working with a group of parents, Principal Jennifer Slabbinck launched an event called Share Your Story that saw parents go into the classroom and share their personal stories with all of the school’s students.

Anthony Russell told students about becoming homeless after the recession destroyed his successful business. Karen Roc shared her experience of battling racism as one of only two black students at her school. Maria Flores, also a fourth-grade teacher at the school, talked about overcoming financial challenges as the daughter of Mexican immigrants who had only a second-grade education.

“The goal was to show everyone how we’re alike and how we’re different,” said Slabbinck. “There are many things we share even though we look different and come from different places. The best way to do that, we thought, is by talking to each other and sharing our stories that foster kindness, love and respect.”

Russell, who grew up on the streets of Chicago, looked out into a diverse classroom of children and told them that their differences are not nearly as important as their similarities.

“Where I grew up, we didn’t look like each other,” said Russell, who now runs a successful limousine business catering to the likes of Meryl Streep and Ricky Gervais. “We didn’t look at each other as black, white, Puerto Rican, Jewish, Polish or Lithuanian. We didn’t care. They were all our friends.”

For Adrienne Carter, the message was different. She told students about conquering her fears of traveling from New York to Brazil by herself, not knowing the language or anyone at her destination.

“You will be afraid, but breath through it,” Carter told students. “Because waiting for you on the other side could be a great victory.” 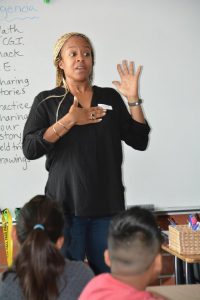 Noah Zatz talked about how his grandmother survived a Nazi work camp during World War II. Deanna Kendall talked about the challenges of being an adoptive mother. And Stuntman Joe Green, who has taken on just about every daredevil move on film, talked about finally learn to swim at age 45, when he ultimately took classes with his daughter to overcome his fear.

“I think we showed (the students) that you don’t have to walk with that fear – whatever your fear is,” Green said. “You can overcome it.”

Roc, who told her story of overcoming racism in the form of spoken word poetry, shared how she straightened her kinky hair to fit in with her white classmates before realizing that she should embrace who she is.

“I am an African, strong and proud,” she said, encouraging the students to, “be yourself, be unique and love every minute of it!”

“I got food from the government,” said Okker, who now works at Sony Pictures. “I only had two pairs of pants and three shirts growing up, but it was OK.”

Okker told students that she worked hard in school because it was her way of paying back her father, who served in the Army, and her mother, who held various jobs including cleaning houses.

“I wanted to show my parents and my grandparents that everything they did was worth it,” said Okker, who added that once her children were grown, her mother went back to school and earned her degree at the age of 63.

Marc Blackbird, who told students of his struggle with grief and his battle to finish high school after his mother died when he was just 15, said just knowing that they are not alone can help students cope with whatever challenges they face. Now a musician, Blackbird said children need to remember one very important aspect of life.

“Everything is temporary,” he said. “You’ll get through it. You have to decide the person you want to be and you can become that person.”