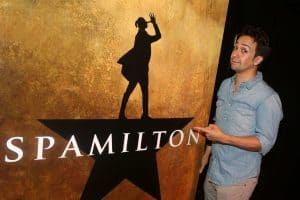 Center Theatre Group will produce the West Coast premiere of the hit musical parody “Spamilton” at the Kirk Douglas Theatre. Presented as part of Center Theatre Group’s 2017-2018 season at the Kirk Douglas Theatre, “Spamilton” will run November 5 through December 31, 2017, with opening set for November 12. The production will launch a national tour with additional cities and dates to be announced. The rest of the Kirk Douglas Theatre’s 2017-2018 season will be announced at a later date.
Created by Gerard Alessandrini, “Spamilton” celebrates and satirizes the Broadway blockbuster with its versatile cast of five. The world premiere Off-Broadway production has been extended three times and is now in its ninth smash month at The Triad and had Lin-Manuel Miranda exclaiming, “I laughed my brains out!”
Marilyn Stasio of Variety mused, “Hip-hop, Broadway showtunes, Viennese waltzes — is there anything this guy can’t write? No, not ‘Hamilton’ creator Lin-Manuel Miranda, but Gerard Alessandrini, whose ingenious parody ‘Spamilton’ simultaneously salutes and sends up Miranda and his signature musical.” And Ben Brantley said “This smart, silly and often convulsively funny thesis, performed by a motor-mouthed cast that is fluent in many tongues, is the work of that eminent specialist in Broadway anatomy, pathology and gossip, Gerard Alessandrini.”
Following a run of packed audiences at The Triad on W. 72nd St., “Spamilton,” the comedic musical take on all things “Hamilton” and Broadway, announced its move to 47th Street Theatre/The Puerto Rican Traveling Theatre with performances beginning June 2, 2017. The show’s move puts it just a stone’s throw from the theatre housing its inspiration and main punchline.
In addition to the Off-Broadway move in New York City, the new production in Los Angeles and the upcoming tour, “Spamilton” recently opened a production in Chicago.
“We’re very excited about expanding the show a bit,” Alessandrini said. “We will also be adding up-to-date references to “Hamilton,” Lin-Manuel Miranda, and their impact on the current Broadway season. So look out Glenn Close, Bette Midler and Evan Hansen!”