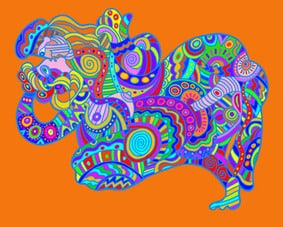 The current exhibit at West Los Angeles College is particularly special to the campus as it features the work of Mauro Caputo, an award-winning graphic designer and long-time West art instructor. A reception, free to the public, will be held in the Fine Arts Gallery on Thursday, April 13 from 5:00pm to 7:00pm. The show runs April 10 – May 4 and is curated by art dealer, lecturer and radio personality Molly Barnes.

As an entrepreneur, Caputo started his own greeting card company which sold exclusively through Saks Fifth Avenue. He gave birth to GIANO, designing and developing a fragrance and skin care line for the discriminating male.
In retirement, he became a teacher and visual artist, designing art screens, tapestries and contemporary paintings on canvas. He found inspiration in the modern masters like Courbet, Matisse and Manet, using Roy Lichtenstein’s witty ben-day dot technique. His visual works were hung in a number of shows in Los Angeles and New York and had his first one man show this past December at Art Core Gallery in Downtown Los Angeles.