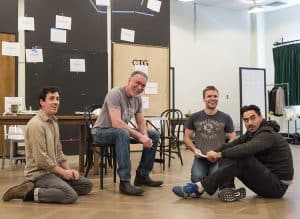 Rehearsals have begun for Center Theatre Group’s production of “Archduke.” Written by Rajiv Joseph, the world premiere of “Archduke” begins previews April 25, opens May 7 and continues through June 4, 2017, at the Mark Taper Forum.
Directed by Giovanna Sardelli, the cast includes, in alphabetical order, Josiah Bania, Stephanie McVay, Ramiz Monsef, Patrick Page, Stephen Stocking and Todd Weeks.
The creative team includes scenic design by Tim Mackabee, costume design by Denitsa Bliznakova, lighting design by Lap Chi Chu, music and sound by Daniel Kluger, casting by Telsey + Company and the production stage manager is David S. Franklin.
“Archduke” follows the unlikely path to terrorism as three strangers, already struggling to get by, receive a death sentence in the form of a tuberculosis diagnosis. But being young men with nothing to lose in Belgrade, 1914, makes them the perfect recruits for a secret organization looking to strike a blow in the name of Serbian nationalism.
“Archduke” explores the short journey from individual hardship to public harm as personal desperation is cultivated into an act with international significance and a few average men spark World War I.
Rajiv Joseph’s “Bengal Tiger at the Baghdad Zoo” premiered at the Kirk Douglas Theatre in 2009 before moving to the Taper in 2010 and Broadway in 2011. “Bengal Tiger at the Baghdad Zoo” was named a 2010 Pulitzer Prize finalist for Drama and was also awarded a grant for Outstanding New American Play by the National Endowment for the Arts. Joseph’s play “Guards at the Taj” was a 2016 Obie winner for Best New American Play and 2016 Lucille Lortel winner for Best Play. His other plays include “The North Pool,” “Gruesome Playground Injuries,” “Animals Out of Paper” and “The Lake Effect.” His plays have been translated and produced worldwide.