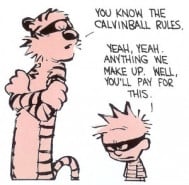 In their continuing disregard for civilization, the Republicans in the United States Senate voted to change the rules. Just so they could get this one particular person that stamp of approval to give them a position. It makes me so angry, I’m just about physically ill.

It’s not ok to change the rules in the middle of the game.

I’m not just calling out the Republicans for their use of this tactic. Our own Culver City Democratic Club did the same thing in  the last two local elections – they changed the rules to allow some people to qualify. Changed the rules right before the meeting that endorsed candidates.  For both the City Council and the School Board elections.

The common wisdom that says it all starts with local politics is wisdom indeed.

I’m sure that the folks who voted to change the rules for the CC Democratic Club are just as upset as I am about the change of rules in the Senate. They may not see the irony that they already participated in this process, and deemed it acceptable.

Rules, by definition, are “one of a set of explicit or understood regulations or principles governing conduct within a particular activity or sphere.” When we agree to these things, we have a level playing field, and a common understanding of how things are to proceed. Without that, it’s just organized bullying. We have the votes to change the rules, and we say its’a fair, so it’s fair.

There is one place to change the rules during the game, and that is Calvinball. In Bill Watterson’s legendary comic strip “Calvin and Hobbes,”  a boy and his tiger make up a game that’s about making up the game as you go along.

The game ends when you are exhausted, bruised, hungry, missing a shoe, and as far from home (plate) as you can get. Or when you decide you are done. No rule can be used twice, (except for the rule that you cannot use a rule twice.) It’s considered optimal to use equipment from multiple sorts, like hitting a badminton shuttlecock with a croquet mallet, or sending a football into orbit with a baseball bat.

In the strip, Calvinball first appears after Calvin fails to get on the baseball team. Because if the rules mean you don’t get what you want, why follow the rules? Well, because that’s what we call civilization.

What I want to make vividly clear is that it does not make it ok if you agree with the agenda of the side changing the rules to their advantage, any rule change in mid-game is simply wrong. It’s not cricket, it’s not kosher, and it’s not civilized. We cannot hold our elected officials to standards we ourselves are not willing to uphold.

Before that coin toss lands, we should all be in agreement on the process.